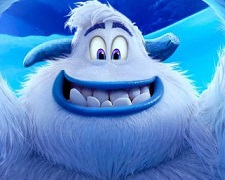 I love the concept of this film.  It’d be easy to make a movie about humans who go in search of the elusive “yeti” but director Karey Kirkpatrick flips that idea and views it from the other perspective.  What if there are a bunch of yetis who live in harmony but have their lives upended when they stumble across a human?  Of course, the human seems incredibly tiny to them and hence they refer to him as “Smallfoot”.

The opening scenes are used to explain the creative setting.  The yetis live high atop a mountain range and their society is dominated by faith and tradition.  They are guided by carvings in old stones that explain how their world was created and the rules they must follow to keep things in balance.  For example, they believe there’s nothing at the bottom of the mountains except for giant woolly mammoths.  They also bang a giant gong each morning to ensure that the sun rises.

Migo (voiced by Channing Tatum) is a young yeti who is starting to question the beliefs of his elders and has gone in search of facts over faith.  No one believes when he proclaims that he saw a Smallfoot and so he takes matters into his own hands.  He captures Percy Patterson (Corden), a struggling human TV presenter, and brings him back to the yeti tribe.  Migo just wants to prove a point but his actions have consequences and life for the yetis will not be the same again…

The messages in animated features tend to get repetitive but Smallfoot feels fresh with its exploration of power, truth, control and “fake news”.  It’s telling younger audiences to ask questions of adults and not be afraid to challenge authority.  The analogies in the film will be obvious to those who take an interest in politics and religion but it’s not as one-sided as you might expect with compelling arguments put forward for multiple viewpoints.

For those not looking to think too deeply and who simply want an enjoyable story, Smallfoot still delivers.  The yetis have been brought to life in a beautiful way by the talented animation team.  They come with jagged horns, crooked teeth, blue lips and look like a giant polar bear.  Without the benefit of clothes, they express themselves through fur colour and distinctive hairstyles.  They’re fun characters but the biggest laughs come from an unexpected source – a quiet, not-so-bright yak who pops up at the right time.

The cast is headlined by Channing Tatum and James Corden whose voices will be easy to recognise.  Corden is particularly good as the self-absorbed TV presenter who will sacrifice all morals in search of TV ratings.  Others include Zendaya, Common, Gina Rodriguez, Danny DeVito, and basketball star LeBron James.  Each gets the chance to impress when called upon.

There are a handful of unnecessary songs but Smallfoot is still one of the year’s best animated films.