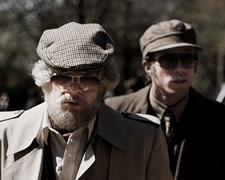 Four American college students break into a library at a prestigious university in Kentucky and attempt to steal a number of rare, extremely valuable books to sell on the black market.  That alone makes American Animals sound like a cool heist flick but there’s so much more to this fascinating piece of cinema that makes it essential viewing.

Firstly, as we’re told during the opening credits, this is a true story.  The planning began in 2003 and the actual robbery took place in 2004.  Secondly, we know things didn’t go to plan and the guys were caught.  This is made clear from the outset and so as we watch events unfold, we know there’s no slick Ocean’s Eleven style finale where they walk off into the night with a sack full of gold.

The most intriguing element to the movie is the decision of British writer-director Bart Layton (The Impostor) to make it part re-enactment, part documentary.  We watch actors bring this compelling story to life but in between, we are treated to interviews from the real life students who committed the crime.  There’s even a point where an actor and his real-life counterpart sit in a car together in the same scene.  It’s very creative.

There’s a lot to take away from American Animals.  Through the interviews with the real students, we understand their respective mindsets and you may be surprised as to their motives.  It wasn’t all about the money and other factors came into play.  The film also makes commentary about how memories change over time and how the stories from those involved are not consistent.  I’m reminded of the great line from the 1998 film adaptation of Great Expectations – “I’m not going to tell this story the way it happened, I’m going to tell it the way I remember it.”

Layton has done a terrific job balancing up the film’s different tones.  The first half is quite comedic as we watch the students bumble their way through the planning phase.  They know nothing when it comes to crime and it reaches a point where they rent heist movies from a local video store in search of ideas.  The mood shifts significantly in the second half as we follow the robbery and its aftermath.  A line had been crossed and there was no going back.  You can sense the regret and remorse from the real-life people involved (who would spend time in prison).

American Animals is anything but your ordinary crime thriller.