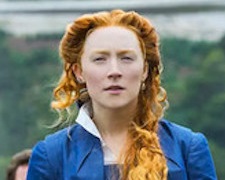 The idea of female leadership and empowerment will be seen, by some at least, as a movement that has taken shape over the past few decades.  Margaret Thatcher became the first British Prime Minister in 1979.  Julia Gillard achieved the same honour here in Australia in 2010.  In the United States, Sandra Day O’Connor became the first woman appointed to the Supreme Court in 1981 and Madeleine Albright became the first female Secretary of State in 1997.  There are many more examples I could list.

Mary Queen of Scots takes us back to an oft forgotten time in the 16th Century when two women were arguably the most powerful people in the United Kingdom (as it is known today).  At the age of just 25, Queen Elizabeth I (Robbie) ascended to the thrones of England and Ireland in 1558 following the death of her half-sister.  Three years later, 18-year-old Mary I (Ronan) returned from France to take up her rightful pace as Queen of Scotland.  The pair were actually first cousins once removed.

Josie Rourke’s film tries to balance up the respective storylines of these two famed characters but as the title suggests, it’s skewed towards the narrative of Mary.  That makes it the opposite of Elizabeth: The Golden Age, the 2007 release from director Shekhar Kapur which starred Cate Blanchett as Elizabeth and Samantha Morton as Mary.  Kapur’s film is superior if you’re looking to know more about this fascinating piece of British history.

Mary Queen of Scots feels like two hours of pointless power games.  Mary has her eyes on the English crown but Elizabeth is quick to rouse her supporters and prevent an uprising.  The film’s problem is that we don’t know what either side is about, aside from differing religious views, and so it’s hard to work out who to cheer for.  They both come across as power-hungry zealots (particularly Mary) who care very little about the people around them and the broader population.  It’s villain versus villain and therefore, I was struggled to invest in their fate.

A tricky part to the real-life story is the fact that while Elizabeth and Mary exchanged numerous letters, they never met face-to-face.  Borrowing from the technique used effectively by Michael Mann in Heat, screenwriter Beau Willimon (House of Cards) tries to builds early tension and then brings the two lead characters together for a pivotal, albeit fictional, scene.  It doesn’t work.  It’s an anti-climactic moment that becomes borderline laughable as the stumble around using the protection of see-through curtains.

It’s not all bad news.  The film does a commendable job exploring the challenges of being a female monarch in a male-dominated era.  Both Elizabeth and Mary have qualms about their not-so-loyal advisers and it’s apparent that many want to use the queens as their puppets as opposed to their leaders.  Saoirse Ronan (Lady Bird, Brooklyn) also deserves praise for her performance as the strong-willed yet flawed Mary.  It’s hard to be too enamoured with Margot Robbie’s (I, Tonya) performance given her character goes missing after the opening act.

If you’re looking to see a great period piece about power games and British royalty… The Favourite is still in Australian cinemas.