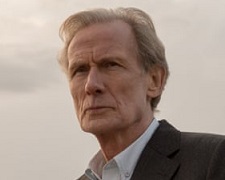 Losing a child is one of the greatest tragedies for a parent to endure.  That grief is further extended and magnified when there are unanswered questions about their child’s death.  These emotions are explored in Sometimes Always Never, a slow-burn British drama from 53-year-old filmmaker Carl Hunter who, after a series of short films and TV documentaries, is directing his first feature film.

Veteran actor Bill Nighy (Love Actually) steps into the shoes of Alan, a semi-retired tailor who has never fully come to grips with the disappearance of his son, Michael, roughly two decades ago.  Michael stormed out of the family home after an innocuous argument over a game of Scrabble (strangely enough) and was never seen again.  The presumption is that he met with foul play but it remains just that – a presumption.

The crux of the film is spent watching Alan, complete with his offbeat sense of humour, interact with an assortment of characters across several days.  He goes on an unexpected road trip with his other son, Peter (Riley), to visit a morgue and inspect an unidentified body.  He befriends and then hustles a long-married couple during a game of Scrabble while staying at an old hotel.  He spends time with his grandson (Healy) and helps him impress a girl by fitting him out in his first suit.

Sometimes Always Never is best described as a dark comedy.  It sounds like a heavy, depressing premise but screenwriter Frank Cottrell-Boyce (Hilary and Jackie, The Railway Man) attempts to inject comedy into most scenarios.  There are times when it works and times when it doesn’t.  As an example, the references to Scrabble words and scores win early laughs but it becomes tiresome and repetitive during later scenes.  It’s a “hook” that’s relied too strongly upon.

It’s hard to fault the casting of Bill Nighy in the leading role since we’ve seen him take on similarly quirky, forlorn characters in the past.  It’s a suitable performance but given the sluggish nature of the material, it’s hard to say it’s a memorable one.  Newcomer Louis Healy will win fans with his scene-stealing performance as the awkward grandson looking for love.

It’s the interaction between the characters that should serve as the film’s heart but given some scenarios are so odd, Sometimes Always Never isn't as effective as it could have been.