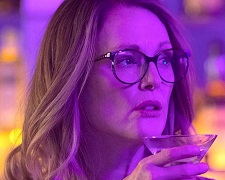 I’ve seen the musical Jersey Boys twice – once with a friend on London’s West End in 2010 and once with my Frankie Valli-loving mother here in Brisbane in 2012.  The cast was different (obviously) but the songs, the storyline and the theatrics were all largely the same.  It’s what you’d expect when a successful Broadway musical is taken around the globe.  You don’t mess with what works.

That said, it’s rare to see that same formula used in cinema.  In 2013, director Sebastián Lelio (A Fantastic Woman) made a charming Chilean-Spanish drama (Gloria) about a lonely woman in her late 50s who was struggling to find friends and romance.  Star Paulina García won the award for best actress at the Berlin Film Festival and 99% of critics gave it the “thumbs up” on the Rotten Tomatoes website.

Academy Award winning actress Julianne Moore (Still Alice) loved the film and through the help of a mutual manager, she organised an hour-long meeting with Lelio in Paris.  It was at that point that the wheels were put in motion for an American remake.  Lelio would team up with an American writer (Alice Johnson Boher) to help translate it into a Los Angeles setting and Moore agreed to take on the lead role while also serving as an executive producer.

It’s remarkable how little has changed between the two versions.  I could cut and paste the plot overview from my original review and I wouldn’t need to change a word.  That’s not to say this isn’t an equally entertaining movie.  To tie it back to my earlier Jersey Boys analogy, it’s still the same delightful character study – it’s just that this time, it’s in English (as opposed to Spanish) and with different actors.

If you’re new to the material, Gloria Bell (Moore) is long-time divorcee who puts up a brave face around others but deep down, it’s evident that something is missing from her life.  Her children have grown up and moved out of home and she doesn’t have a broad friendship group.  It seems that she’s happiest in the car (where she gleefully sings her favourite songs) and in bars (where she passionately hits the dancefloor and meets new men).

Having spent years waiting for the right guy to come along, Gloria appears to have found love again with Arnold (Turturro), a grey-haired, softly spoken suitor.  They enjoy spending time together but the clingy Arnold comes with baggage.  His divorce was much more recent and he’s struggling to escape the non-stop phone calls from his ex-wife and unnecessarily dependent children.  Gloria, a touch insecure after years living as a single woman, isn’t quite sure how to handle the situation.

Gloria Bell is an authentic romantic drama that is void of clichés and over-scripted dialogue.  From the opening sequence to the thought-provoking dance number just prior to the closing credits, you’ll be interested in Gloria’s world and her search for happiness.  Julianne Moore appears in every scene and, as expected, delivers a heartfelt performance.  It’s hard not to feel empathy for her character.

Cinemas will be packed this weekend with most looking to see Avengers: Endgame but if you’re looking for a non-comic book alternative, Gloria Bell is a great choice.