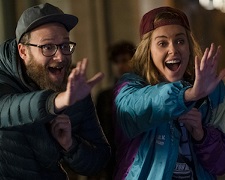 For many who enter politics in the United States, there’s a long term dream that they’ll one day get to sit behind the Oval Office’s Resolute desk and provide direction in their capacity as President.  In the case of Charlotte Field (Theron), that may be happening sooner than expected.  She’s already the youngest Secretary of State in history and with President Chambers (Odenkirk) looking to step down after one term to pursue a film career, he’s ready to endorse Charlotte as his successor.

Charlotte has a hard-working team that are providing her with poll numbers (they’re goofily high) but there are a few areas that she needs to work on.  The public have concerns about her awkward wave and her non-existent sense of humour.  You might think that people would select a candidate based on policy but given everything we’ve seen around the world over the past few years, a discussion about a politician’s comedic tone is not that outrageous.

It’s at this point where she teams up with an unlikely assistant.  Fred Flarsky (Rogen) is a journalist who recently quit his job for a local newspaper after it was bought out by a wealthy, influential media tycoon (Serkis).  He’s a man of integrity and didn’t want to see his investigative work squashed by partisan, right-wing management.  Much to the displeasure of Charlotte’s team (who aren’t a fan), she brings Fred on as a speech writer to help inject her addresses with a splash of colour and humour.

They’re an unlikely duo but there is a backstory.  These two grew up together in the same neighbourhood with a 16-year-old Charlotte, seeking election at the time for the position of school president, babysitting a 13-year-old Fred.  It’s been decades since they’ve spoken but after bumping into each other at low-key Boyz II Men performance, their friendship was rekindled and the job offer made.

Watching Long Shot brought back memories of a favourite romantic comedy from the 1990s – Rob Reiner’s The American President.  It was the tale of a popular President (Michael Douglas) driving major policy initiatives around gun control and climate change whilst also falling in love in an intelligent lobbyist (Annette Bening).  His opponent (Richard Dreyfuss) then uses the President’s love life as a tool to attack his clean, family-friendly image.

Long Shot is pushing a similar message but it does so in a less convincing manner.  Charlotte is talking up a worldwide environmental initiative (“Bees, Trees and Seas”) but this element, which is the most interesting in the film, is over-simplified to make room for duller subplots (such as the media mogul).  Rather than say something on the complex, high-negotiation world of politics, you’re left thinking that Charlotte is a quasi-saint given the simplicity at which she schmoozes world leaders.  It doesn’t feel authentic.

Rather than delve too deeply into the political angle, Long Shot becomes a safer romantic comedy by focusing on the sexual relationship that develops between Charlotte and Fred.  It too struggles to make an impact given the contrived nature of some scenes (e.g. an action piece in The Philippines) and the fact their life values are significantly different.  Again, I didn’t buy into it.

Directed by Jonathan Levine (50/50), Long Shot has a few good laughs but they’re not quite enough to make up for its broader shortcomings.