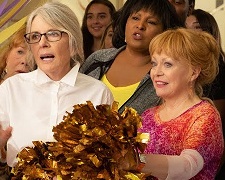 The thought of dying alone can be really, really scary.  It’s a reality that Martha (Keaton) must now face.  She never married, she never had children and now the 70-something-year-old is battling terminal cancer.  There’ll be no one left behind to “pick up the pieces” once she’s gone and so it’s a task that Martha has taken on herself.

She’s sold her New York City apartment (where she’s lived for 46 years), discarded most of her clothes and possessions, and moved into a retirement community in Sun Springs where she can lie on the couch in her pyjamas and watch Days of Our Lives.  When asked by a fellow retiree why she made the big life change, Martha is honest – “I’m just here to die”.

Poms could have been a heavy, tear-jerky drama but writers Zara Hayes and Shane Atkinson have gone with a softer spin.  There’s lots to do at the retirement community (swimming, golfing, bowling) but it’s a condition (and a convenient plot device) that every resident must join a club.  Martha isn’t particularly keen on joining any existing clubs and so after discovering her high school cheerleading uniform as part of the apartment clean-up, she decides to start her own.

Together, they assemble an eclectic group of fellow retirees who have a background in everything from yoga to aerobics.  The training sessions begin and the goal is to compete in front of a big crowd in front of the annual Senior Showcase.  It starts out as a bit of fun but it’s not long before the competitive nature within these women starts to come through.  They’re keen to overcome their assortment of medical conditions (knee replacements, dizziness, sore shoulders) and serve it up to the many naysayers who say there’s no place in society for 80-year-old cheerleaders.

The script could have been sharper.  The Martha we’re introduced to is such a sad soul and so it’s a little odd that she develops such a quick, overly serious passion for her cheerleading club project.  There’s also a strange sequence where the cheerleading group perform a “practice run” in front of teenagers and parents at a high school.  The heavily negative reaction from the crowd and younger cheerleaders didn’t feel authentic.

Despite its shortcomings, there are elements to Poms that make it an easy-to-watch, crowd pleasing comedy.  There's strong comedic chemistry between its largely female cast and there’s some well-delivered banter between two great actresses, Diane Keaton and Jacki Weaver.  You’ll also take pleasure in seeing the cynics (led by Celia Weston as an interfering busybody) get what they deserve.

Poms clocks in at a workable 91 minutes and features a well-chosen mix of iconic songs including favourites from Shirley Ellis, Tammy Wynette and Diana Ross.  With its release coinciding with Mother’s Day here in Australia and the United States, it’s likely to find a few fans.