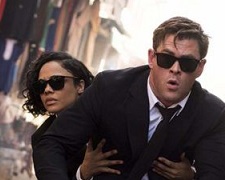 The first three films in the Men in Black series (which began back in 1997) saw Will Smith team up with Tommy Lee Jones as secret agents charged with the responsibility of monitoring the many alien lifeforms that covertly reside on Earth.  The producers felt that the Smith and Jones storylines were “emotionally complete” and so to keep the franchise alive, they’ve gone with a quasi-reboot for Men in Black: International.

London is now the main setting and two new characters have been created.  Australian Chris Hemsworth (Thor) is Agent H, a renowned, playful individual who is credited with “saving the world” on his most famous assignment.  American Tessa Thompson (Creed) is Agent M, a fresh recruit who has spent almost 20 years preparing for this dream job and now gets the chance to prove herself.

Directed by F. Gary Gray (Straight Outta Compton), Men in Black: International is a disappointing action-comedy.  In trying to act overly cool and funny, these heroes come off as fake and boring.  They’re rarely put under any pressure and they stumble from scene-to-scene as if they know exactly what’s around the corner.  They try to add depth to Agent M’s character by introducing her as a tormented soul (she’s never had pets or been in a relationship) but all of that seems forgotten when she joins the Men in Black organisation.

Similar criticisms can be levelled at the film’s villains who have weak, unexciting motives.  There’s a cliched, power-hungry alien played by Rebecca Ferguson (The Greatest Showman) looking to get her hands on the world’s most potent weapon.  Also in the mix are two shape-shifting creatures, played by the Les Twins, who keep popping up in the right places but never feel threatening given their incompetence.

The one bright spark comes from an actor we don’t get to see.  Kumail Nanjiani (The Big Sick) plays the voice of a funny alien dubbed “Pawny” who is small in stature but big on personality.  He doesn’t have a huge role to play but his insecure, self-deprecating nature earns laughs.  It’s a shame he didn’t get more screen time.

It’s only mid-June but Men in Black: International marks the 15th sequel, reboot or remake to be released in Australian cinemas.  Some have underperformed at the box-office (e.g. X-Men: Dark Phoenix, Godzilla II: King of the Monsters) and so it’ll be interesting to see if this one can lure in its previous fans.  I have my doubts.