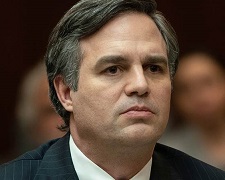 A drama about an inexperienced lawyer and a group of sick people who take legal action against a powerful American company for contaminating the local water supply and concealing their involvement.  Sound familiar?  If you’ve seen John Travolta in A Civil Action (1998) or Julia Roberts’ Oscar winning performance in Erin Brockovich (2000) then you’ll be familiar with this very niche genre.  The latest addition is Dark Waters from acclaimed director Todd Haynes (Carol, Far From Heaven).

I’d be curious to know whether any executives at Dupont, a hugely profitable chemicals company based in Delaware, saw those two movies and pondered the morality of their own operations.  If so, they’ll never admit in publicly.  For decades, the company was knowingly using toxic chemicals that were linked to diseases including testicular and kidney cancer.  Employees at their West Virginia plant were affected and so too were nearby townsfolk when the chemicals contaminated rivers, dams and drinking water.

Dark Waters begins in 1998 and is told from the perspective of lawyer Robert Bilott (Ruffalo), a newly minted partner working for a decent sized firm in Ohio.  He is approached Wilbur Tennant (Camp), a farmer friend of his grandmother, and asked to investigate the role of Dupont in the death of roughly 200 cattle on his hilly farm.  Bilott is reluctant at first (he specialises in defending big companies instead of prosecuting them) but given the family connection, he agrees to look into issue and offer a little help.

There are so many interesting subjects worth exploring in a movie such as this.  There’s the exhausting mental toll it takes on a lawyer and their family when fighting the same case for two decades.  There’s the role of law firms and the limits to which they can provide pro bono work in the public interest without jeopardising their profitability.  There’s the responsibility of environmental protection agencies who operate on small budgets and are often behind the curve.  And… there’s the multi-national corporations themselves who provide valuable jobs in poorer, regional communities and use this to create a beloved, untouchable image (effectively “brainwashing” the residents).

A weakness of Dark Waters is its inability to successfully juggle its many characters and the aforementioned themes.  Perhaps it’s trying to say too much?  Anne Hathaway plays Bilott’s loyal wife but it feels like a “throw away” role with little to offer (excluding one key moment towards the end).  Tim Robbins’ plays a law firm partner but he’s a confusing character given his opinion of Bilott’s work is forever changing (and we never understand why).  Bill Pullman seems to have been included purely for comic relief as a goofy, not-so-prepared trial lawyer.

Still, this is an important film.  It reminds about the dangers of environmental self-regulation and how we, as a broader society, must not be afraid to continuously question and interrogate when things look suspicious.  Without unsung heroes like Robert Bilott, the world will be a sadder, more dangerous place.