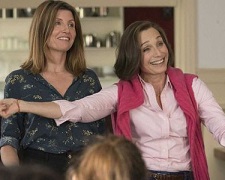 At the film’s world premiere in Toronto last September, Oscar nominated director Peter Cattaneo (The Full Monty) lamented that “you see hundreds of war films, but you’ve never seen what happens to the families left behind.”  That’s a slight generalisation (many war films do offer a family perspective) but I can see his point given this story is told solely from the perspective of a group of women in Britain while their husbands are off serving in Afghanistan.

Some may already know the true story on which it’s based.  The idea began in 2010 when two women from North Yorkshire started a small choir.  It was intended to be a support mechanism for women looking to pass the time while their spouses/boyfriends were on overseas deployment.  Similar choirs were formed across the country and they came together as part of BBC television show, The Choir: Military Wives, which first aired in November 2011.  A month later, they released a single which went to #1 on the UK Single Chart over the Christmas period.

Military Wives is a semi-fictionalised version of events.  It opens with two very different women, Kate (Scott Thomas) and Lisa (Horgan), being charged with the responsibility of organising social activities at their military base.  Kate is sophisticated, controlling and formal.  Lisa is the exact opposite.  It’s not hard to see the awkward tension between the pair as they squabble over the tiniest details when planning get-togethers for the local women.

They ultimately settle on the choir idea and, if you’ve seen your fair share of feel-good flicks, you should know what to expect.  There’s the initial nerves and reluctance from the group.  There’s the singer who doesn’t realise how beautiful her voice is.  There’s the arguments over which songs to use.  There’s the big performance at the end (complete with a few hiccups in the hours leading up to it).  They’re plot devices we’ve seen used before in films such as As It Is in Heaven to Pitch Perfect.

I tired of the goofy, repetitive tiffs between Kristen Scott Thomas and Sharon Horgan (who feel like they’re overplaying their characters at times).  Thankfully, screenwriters Rachel Tunnard and Rosanne Flynn push for a more dramatic layer in the second half with several interesting subplots involving the theme of grief.  It leaves a stronger mark than the choir stuff in the sense that it’s more emotional and less clichéd.  We get to see these people open up and act like real humans.

Military Wives has been compared against the likes of Calendar Girls, Brassed Off and The Full Monty and so if you’re a fan of those, this might put a smile on your face (and maybe a tear down the cheek).