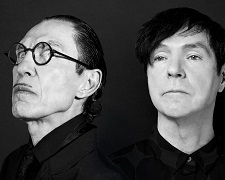 When it comes to music biopics and documentaries, the tendency is to focus on well-known artists.  It’s a lot easier to sell tickets and make money when you’re pitching it to the millions of existing fans who adore the likes of Johnny Cash, Freddie Mercury, Elton John, Ray Charles, Amy Winehouse and Aretha Franklin.

On top of that, it’s also advisable to pick musicians with massive highs and massive lows.  If you want to create something theatrical and dramatic, it helps when the subject matter has battled drug addictions, marital difficulties and/or financial woes.  Audiences like to see their “heroes” rise to the top, fall down, learn from their mistakes, and then overcome adversity to rise again.

The Sparks Brothers bucks that trend.  It’s a documentary that chronicles the livelihood of two brothers from California, Ron and Russell Mael, who formed a music duo known as Sparks in 1967.  They’ve released 25 albums across more than five decades (which you’d describe as a solid, steady career) but none of their songs ever made it to #1 in a major market.  If interviewing people on the street, I’d bet a sizeable portion of the population have never heard of them before (myself included).

From what we learn in the film, Sparks have developed a cult-like following with many in the music industry.  I like the tagline used on the poster in that they’re “your favourite band’s favourite band”.  It highlights that whilst they never achieved award-winning, millionaire-type fame, their music has shaped and influenced so many other artists that did.

The film follows the natural, chronological order of events – beginning with their first album release in the 1960s and following their career through to the current day.  It’s the creation of director Edgar Wright (Shaun of the Dead, Scott Pilgrim vs. the World) and it’s hard to believe how many people he got to speak on screen about their admiration and interaction with Sparks over the years.

Wright first met the brothers 6 years ago and he was inspired by how they could keep reinventing themselves and changing their music again and again over half a century.  It’s easy to see the attraction.  I too was immensely entertained listening to Ron and Russell open up – they’re fun, likeable, self-deprecating guys with a great sense of humour.  The same applies to Wright who infuses the documentary with his own off-beat comedy (such as creative subtitling).

The film will appeal to Sparks fans but it’ll be just as enjoyable for others.  It’s nice going into the cinema and not having any preconceived views about the subject (which might not be the case for a Freddie Mercury or Elton John biopic where you know how it will pan out).  It may sound like a stretch at 140 minutes but The Sparks Brothers is one of the year’s best documentaries and will engage you from start to finish.