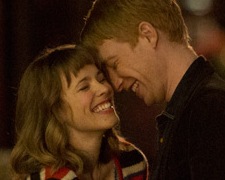 He was born in Wellington, New Zealand but the name Richard Curtis is now synonymous with British comedies. In the 1980s and early 1990s, he was a writer on two successful television series that are still highly regarded today – Black Adder and Mr. Bean. His focus then shifted to film and in particular, the romantic comedy genre. Curtis’s writing credits include Four Weddings & A Funeral (which earned him an Oscar nomination), Notting Hill, Bridget Jones’s Diary and Love Actually.

About Time is his latest effort and it brings together two likeable leads. Canadian Rachel McAdams is no stranger to romance having appeared in Wedding Crashers, The Notebook and Sherlock Holmes. Irishman Domnhall Gleeson won’t be as well known. He’s the son of Brendan Gleeson (In Bruges, The Guard) and has a history of small supporting roles in films such as True Grit, Anna Karenina and Harry Potter And The Deathly Hallows.

Their respective characters, named Tim and Mary, meet in unusual circumstances. There’s a restaurant in London that operates in complete darkness. You cannot see a thing. You are guided to your table by the waiter and you do your best to take a seat without falling over. So what’s on the menu? Well, since you won’t be able to read it, you’ll just have to wait until you put the food in your mouth. If you like the idea, you’ll be happy to know that such a restaurant actually exists in London (make sure you book ahead at the Dans le noir).

Tim and Mary aren’t there together though. They’re sitting at adjoining tables and by chance, start up a conversation during the middle of their evening. There’s an obvious connection and the pair share a similar sense of humour. The trick is… they don’t know what each other looks like! It’s not until the end of the night, when they leave through the front door and stand on the footpath, that their sense of sight is finally utilised.

A relationship promptly ensues and it’s at this point that I should reveal this film’s important hook – Tim has the ability to travel back in time. He is given the news by his laidback father (Nighy) on his 21st birthday. There are certain limitations however. Only small events can be changed due to the risks of the “butterfly effect.” Tim’s dad sums it up best – “you can can’t kill Hitler or shag Helen of Troy.”

It’s still a very useful power, as you can imagine. Tim tends to be rather nervous, clumsy and so the ability to slip back in time gives him a “second chance” when things don’t quite go right. This is epitomised by their first sexual encounter which leaves Tim hugely embarrassed. Not too worry. Let’s just try it again. The same goes for an impromptu visit from Mary’s parents where Tim’s foot seems permanently stuck in his mouth.

If you’re prepared to “go along” with the time travel story and not get too picky about specifics, you’re likely to enjoy About Time. There’s a clear, warm-hearted message that comes through during the film’s third act that asks the question – what is your idea of a perfect day? The nervous, insecure Gleeson and the sweet, level-headed McAdams make a nice pair. Bill Nighy (The Boat That Rocked, Hot Fuzz) is also terrific – doing what he does and stealing any scene that he can weave his way into.

Sitting with a healthy 7.6 out of 10 average from the public on the Internet Movie Database, it’s not just me who thinks that About Time is an above average romantic comedy.

You can read my chat with writer-director Richard Curtis by clicking here.