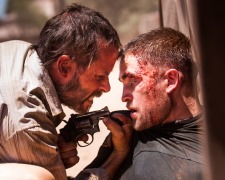 The Rover is set in the not-to-distant future where Australia has become a very different place.  Society has collapsed.  Law and order is non-existent.  The roads are in a state of disrepair.  The local currency has no value.  It’s a struggle to find food, water, and fuel.

So why has Australia developed into a third world country?  You can ponder and come up with your own answers because writer-director David Michôd (Animal Kingdom) won’t be providing them.  That’s ok though.  Michôd’s focus is on providing an intriguing character study and in that regard, this is a movie that delivers in a huge way.

You’ve probably heard the saying “beware the man who has nothing to lose”.  It’s a perfect description for Eric (Pearce) – a loner who is drifting through the Australian outback.  He has no job, no family, and no reason for living.  His sole possession is a dusty, rundown car that he uses to move from town to town.

That is until his car is stolen by three men after a botched robbery.  The odds of hunting them down are pretty slim (particularly since there are no police) but Eric catches a break when he stumbles across Rey (Pattinson) – a young man suffering from a bullet wound to the chest.  He’s the younger brother of one of the thieves and was left for dead following the robbery.

Eric organises for the wound to be stitched up but it’s obviously not a gesture of goodwill.  He needs to keep Rey alive so he can obtain information about the location of his brother and hence, the car.  What follows is an uneasy road trip.  The pair head south and encounter an assortment of equally desperate people doing whatever is necessary to survive.

This is an intense film.  Music is kept to a minimum.  Conversation is kept to a minimum.  Guy Pearce is fantastic as Eric – a quiet, forlorn individual who never seems to say anything unless he’s asking an important question.  Also impressive is Robert Pattison who continues to distance himself from the Twilight franchise with interesting roles.

The heart of this movie is the uncomfortable bond that develops between them.  No matter how hard we try shut ourselves off from the world, there will always be cathartic value in opening up and interacting with others.  You won’t see these two sitting on a couch and sharing their childhood adventures over a glass of red wine (thank goodness).  Rather, you see the connection slowly build with each passing scene.  As they get to know each other, so too do we as the audience.

Shot amongst the Flinders Rangers in a remote part of the South Australian outback, Michôd has created a grim, depressing setting.  The actors look like they haven’t had a shower in weeks and everything feels like it’s covered in a thick layer of dust.  Some may be rattled by a few moments of brutality but the violence is not gratuitous unless absolutely necessary.

Animal Kingdom was a life changing experience for Michôd.  It was a critical success internationally, it won the Australian Film Institute Award for best picture, and it earned star Jacki Weaver a well-deserved Oscar nomination.  The Rover is another strong addition to his resume and I look forward to following the career of this gifted 41-year-old with great interest.

You can read my chat with star Guy Pearce by clicking here.

You can read my chat with director David Michod by clicking here.