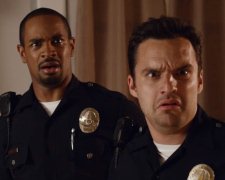 Justin Miller (Wayans) and Ryan O’Malley (Johnson) are two guys living in Los Angeles who are going absolutely nowhere in life.  Justin works for a video game design company where he gets no admiration from his fellow employees.  His ideas are quickly scoffed at.  Ryan doesn’t even have a job.  He gets by thanks to royalties from a general herpes commercial he featured in two years ago (his only acting gig).

To put it bluntly – they’re screw-ups.  This is illustrated when they turn up to their high school reunion.  Both of them have come dressed as police officers thinking it to be a costume party.  It turns out Ryan misread the invitation.  It’s actually a masquerade party and they’re instantly the butt of everyone’s jokes.

Don’t feel sorry for them though.  Despite their silly actions, their lack of friends, and their inability to meet women, Justin and Ryan are about to have a hell of a lot of fun.  While walking home from the reunion, they find everyone looking at them differently.  It’s not because they’ve suddenly becoming better looking.  It’s because they’re still wearing the police uniforms.  Suddenly, people respect them.

There are lengthy prison sentences for those impersonating a police officer but it doesn’t deter these two.  They take their charade a step further by purchasing fake guns, bullet proof vests, and a run-down police car (complete with sirens).  They hit the streets and actually take it upon themselves to investigate crimes (well, the ones that interest them).

You could possibly argue that Justin and Ryan are the “bad guys” but since this is a light-hearted buddy comedy, you need a stereotypical bad guy for them to face off against.  This is where the film introduces us to a group of sinister Albanians who seem to be involved in everything – drugs, guns, corruption and money laundering.  They’re led by the villainous Mossi Kasic who warns them that “I’m the law here.”

That’s enough said in terms of the story.  It’s not particularly adventurous and there aren’t many laugh-out-loud moments.  There’s only so far you can take this concept and I quickly grew tired of the crude, endless chatter between the two leading characters.  They party in nightclubs, they smoke weed, and they torture suspects.  Some may find it amusing.  Others (myself included) will not.

It won’t be winning any awards but those at 20th Century Fox won’t be complaining.  Let’s Be Cops was shot on a budget of just $14m and has already grossed in excess of $100m across the globe.  The film clearly has its fans but if I’m sitting down to watch a buddy cop comedy, I’d much rather go with Bad Boys, Lethal Weapon, Rush Hour, The Heat, The Guard or Hot Fuzz.    Those films will be remembered.  This one will not.