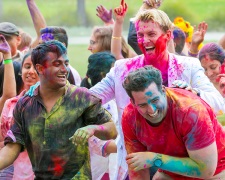 As reported through the media last week, 2015 has been a stellar year for Australian made films at the local box-office.  They reeled in $64.1m which, adjusted for inflation, is the highest total since 2001 (a year that had Moulin Rouge and Lantana).  Mad Max: Fury Road has been the biggest contributor with The Water Diviner, Last Cab To Darwin, Oddball and Blinky Bill also performing well.  That Sugar Film set its own record and is now our highest grossing Aussie documentary.

Despite those impressive numbers, one could also argue that the “glass is half empty.”  The $64.1m total represents less than 7% of total box-office receipts in Australia.  It’s become increasingly difficult to compete with the huge blockbusters coming out of the United States.  It boils down to marketing.  When you’re a small Aussie film with a tiny production budget, how can you compete when Marvel spends $200 million in marketing alone to promote their latest superhero movie?

One Aussie trying to make a difference is Devendra Gupta, a wealthy IT entrepreneur based in Sydney.  In 2013, he helped establish the Australian India Film Fund (AIFF) which aims to generate funding for “India-centric Australian films for a global audience.”  The idea makes perfect sense.  India has a huge film culture and produces more movies than any other country.  Widening the target audience will increase the film’s chances of being profitable.  More money equals more movies.

UnIndian is the AIFF’s first feature film and you don’t need to sift through the closing credits to find the names of the major investors.  The product placement is not subtle.  Will (Lee) teaches English language classes at the University of New South Wales.  Meera (Chatterjee) is single mum with a well-paying job at Cochlear.  A song used during the film includes the lyrics “come and fall in love with Sydney.”  Kudos to the New South Wales Government for getting that included.

It’s as cheesy as it sounds but UnIndian is still an entertaining romantic comedy.  Will and Meera come from different backgrounds but fate seems determined to bring them together.  How else can you explain them randomly bumping into each other 4 times during the film’s opening 20 minutes?  It’s not long before Will is able to convince Meera to take the plunge and go on a date.

Unfortunately, those around them are intent on making life as difficult as possible.  Meera’s parents are trying to push her into an arranged marriage with a wealthy Indian doctor (Brown).  Her young daughter (Sathi) is secretly trying to get in touch with her estranged father (Grover).  Will’s boss is threating to cut off funding to his successful English language program.  Things are getting messy.

The screenplay is formulaic (it even includes a racing to the airport scene) but the likeable cast more than compensate.  The film marks the acting debut of Australia cricket star Brett Lee who looks surprisingly relaxed.  The conversations shared between he and co-star Tannishtha Chartterjee are not over-scripted.  Supriya Pathak Kapur earns plenty of laughs as Meera’s stressing, overbearing mother and Arka Das also impresses as Will’s close friend.

Offering an insight into Indian culture here in Australia, UnIndian is simple and easy to enjoy.

You can read by chat with star Brett Lee by clicking here.