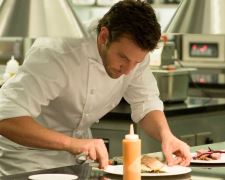 Adam Jones (Cooper) is a bizarre character.  Over a 10 year span, he rose to become “the Rolling Stones of chefs” for a famous Parisian restaurant.  He was cocky, he was arrogant, but he was also the best.  Then, he threw it all way.  He developed addictions to sex, drugs and alcohol.  He also owed a huge sum of money to drug dealers.

Adam could have faced his problems in a traditional manner.  He could have sought professional help from a treatment facility.  He could have apologised to those he’d hurt.  He could have worked off the debts he owed.  Instead, Adam decided on a more neurotic form of “penance”.  He fled Paris, moved to New Orleans, and spent a few years shucking oysters in a rundown restaurant.  He kept a journal where he actually counted the number of oysters.  As the film begins, the total ticks over to 1 million.  It seems like an odd way to clear his head.

Now free of his addictions, Adam returns to Europe to catch up with some faces from the past.  Suffice to say they’re surprised to see him.  They all thought he was dead.  You’d of thought he could have least told a few people he was going to New Orleans so as not to cause so much stress and worry.  It’s yet another reason why Adam is such a hard character to like.  He really was a shmuck.

Ah, but is he still a shmuck?  I’d argue the answer is yes.  Before his life fell apart, Adam was the head chef at a 2 Michelin star restaurant.  He now wants to go one step further and earn the most coveted of acknowledgments – a third Michelin star.  He convinces his old partner (Bruhl) to take him back in and he pulls together a group of young chefs from London.

I can’t say I’m a huge fan of his leadership style.  He comes across as deranged lunatic who continually abuses and degrades his staff.  Perhaps he wants to make them better at what they do (kind of like J.K. Simmons in Whiplash) but you can’t help but feel he’s just using them to achieve his own selfish dreams.

Burnt is a film that doesn’t work.  It’s intended to be a tale of redemption but Adam doesn’t have a lot of redeeming qualities.  The film is also vague about his backstory.  What happened during his breakdown in Paris?  It’s an event that’s mentioned numerous times but few details are revealed.

The supporting cast are woefully underutilised.  Uma Thurman (Pulp Fiction) is credited on the film’s poster but appears in only one scene as an influential food critic.  Is that all she was contracted for?  Or were scenes left on the cutting room floor because parts of the film weren’t working?  Sam Keeley plays a budding chef but his character goes nowhere.  Emma Thompson plays a therapist who makes little impact.  Omar Sy plays a fellow chef but we know little about his past altercations with Adam (which becomes important in the later stages).

Directed by John Wells (August: Osage County) and written by Steven Knight (Dirty Pretty Things), one can’t help but think this finished product is what they envisioned.