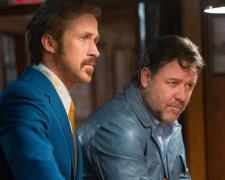 When going to the movies, there are few things better than a great comedy that catches you off guard.  Kiss Kiss Bang Bang (released in 2005) is a perfect example.  It marked the directorial debut of Shane Black who had already made a name for himself as an action film writer (Lethal Weapon, The Last Boy Scout).  It was smart, it was dark, and it wasn’t afraid to mock well-worn themes from previous crime flicks.  The movie also helped reinvigorate the career of Robert Downey Jr who was struggling to find good roles (this was prior to being cast as Iron Man).

It wasn’t a huge box-office hit but the film was praised by most critics and developed a cult- like following.  It’s therefore surprising that Black only made one film in the decade that followed – Iron Man 3 in 2008.  That was never Black’s intention.  He first wrote the script for The Nice Guys back in 2001 and was hoping to get it off the ground long before now.  He even toyed with the idea of making it into a television show but that avenue was also unsuccessful.

In 2014, the script finally found its way into the hands of Ryan Gosling who was looking for something different and was keen to sign up.  Everything else then fell into place.  Russell Crowe said “yes” because he was keen to work with Gosling and the investors said “yes” because the production now had star power.

The film is similar to Kiss Kiss Bang Bang mould in that in pays homage to the crime genre while also taunting it at the same time.  It’s set in the late 1970s and follows two guys making an unusual living.  Healy (Crowe) is an enforcer.  He acknowledges that he’s not in the White Pages and that you should give him a call if someone’s fooling around with your 13-year-old daughter.  He’ll dish out any punishment for the right price.

March (Gosling) is a struggling private detective who is trying to look after a daughter (Rice) of his own.  He’d rather be working on juicier cases but he often finds himself being employed by jilted lovers looking for evidence on their cheating spouses.  Given his lack of ethics and his continual battles with alcoholism, he’s not exactly the first choice when looking for someone in his profession.

These two didn’t know each other beforehand but they reluctantly team up when engaged on the same job.  They’ve been handsomely paid to locate a missing woman.  It may sound like a simple case but when several persons of interest are found dead, it develops into a case far beyond their expertise.  These guys don’t have the skills of a James Bond or Jason Bourne.  They stumble their way through each scenario and are only progressing as a result of extreme good fortune.

Given the film’s lighter tone, their hapless nature adds to their likeability.  They share some great conversations and spend much of the film arguing about their approach to the case.  There are also a few unexpected surprises and “red herrings” that again, we’re not accustomed to seeing in these types of movies.  An example is a scene where they try to decipher a message left on a pink piece of paper (you’ll know what I mean once you’ve seen the film).

They may sound like an unorthodox pairing given that we’re accustomed to seeing them in dramatic roles but the pairing of Crowe and Gosling works well.  Crowe plays the rational, sensible guy while Gosling pulls his weight as the crazier, goofier guy.  Shane Black also gives the film a fun 1970s feel with its sets, costumes, music and opening credits sequence.

Not everyone will go for the quirkier sense of humour but The Nice Guys is right up my alley.