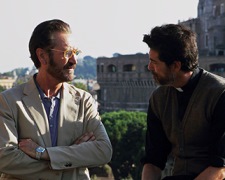 It opened the Italian Film Festival here in Australia last September now God Willing is reaching for a slightly wider audience with a limited across the country.  It’s a fun, over-the-top comedy that clocks in at a tight 87 minutes and provides more than enough laughs along the way.

The central character is a gifted surgeon by the name of Tommaso (Giallini).  Modest he is not.  He maintains exceptionally high standards at work and is quick to criticise any staff member who doesn’t share his views.  He’s not subtle either.  There’s a scene where he successfully completes a difficult heart operation and then passes on the good news to the man’s family in the waiting room.  They proclaim it to be a “miracle” but Tommaso is quick to refute.  God had nothing to do with this.  His skill and dexterity with the scalpel is the reason the man survived.

He’s not a likeable character (obviously) and so the audience will enjoy the film’s major plot development.  Tomasso’s twenty-something-year-old son, Andrea (Oetiker) tells his family that he wants to meet and discuss something very important.  Their hunch is that Andrea will announce that he’s gay but the truth is a lot more surprising.  Andrea has decided to quit medical school and become a Catholic priest.

A staunch atheist, Tommaso is horrified by the announcement but chooses not to admit this to Andrea.  Instead, he goes on reconnaissance to get to the bottom of his son’s unexpected decision.  Tommaso takes on a fake identity and introduces himself to Andrea’s mentor, the young Father Pietro (Gassmann).  He’s looking for any evidence that shows the priest’s intentions are not so honourable.

Writer-director Edoardo Maria Falcone offers a few twists along the way.  I’d argue that they’re fairly predictable but they don’t detract from the amusement of each scene as events unfold.  Marco Giallini is great in the lead role as the self-centred, arrogant father who finally faces a situation that he cannot control.  His character’s persona is slightly exaggerated to fit with the film’s comedic tone.

A backstory involving Tommaso’s disgruntled wife (Morante) is pushed too far into the background.  She’s unhappy with her husband’s lack of affection and starts looking at better ways to spend her time.  Her adventures feel like unnecessary “filler” and don’t contribute to the main narrative.  The same can be said of Tommaso’s daughter (Spada) who is given even less to worth with.

Flaws aside, God Willing is still an entertaining romp that culminates on a reflective moment.