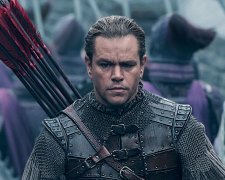 With a price tag of $135 million USD, The Great Wall is the most expensive film ever shot in China.  That’s a significant milestone given the country is now one of cinema’s most important markets.  It comes to us from Zhang Yimou, the acclaimed Chinese director whose credits include Raise the Red Lantern, Hero and House of Flying Daggers.  He also directed the opening and closing ceremonies for the 2008 Summer Olympic Games in Beijing.

This is an epic creation and it’s not hard to see where the money was spent.  It may be set atop one of the world’s great landmarks but the film is anything but a history lesson.  It takes us back to ancient times not long after the Great Wall of China was constructed.  We learn that the wall was built to protect its people from invasion.  I guess that part is true.  The twist here is that the enemy are monsters (and I don’t mean that in the metaphorical sense) as opposed to other tribes.  As a medieval-style fantasy, it resembles Game of Thrones but with a Chinese flavour.

The hero who helps save the day is William Garin (Damon).  He’s a Westerner who is travelling with his close friend, Pero (Pascal), and is looking for the elusive “black powder” to take back home.  I’m not sure what country William is from but there’s a tinge of Irish in Damon’s accent.  They stumble across the Nameless Order – a huge collection of warriors who help guard the wall and stop the monsters from getting past.

It feels odd to be saying this but the weakest element of the film is Damon.  He and Pascal have fun with some light banter earlier but he’s not the most exciting of heroes.  Their plans to steal dynamite from with the help of another unnecessary European (Dafoe) don’t add up to much.  The real stars of this film are the Chinese actors.  28-year-old Jing Tian is wonderful as a female leader within the Order who commands a strong presence.  We’ll see more from her later this year in Kong: Skull Island and Pacific Rim: Uprising.

Kudos also must go to Yimou and the screenwriting team who have achieved something that’s quite difficult – creating original, creative action sequences.  Instead of the mindless, over-edited, over-the-top rubbish that has infested the action genre, we’re treated to some colourful, stylish scenes as the warriors use an array of tricks and weaponry to slay the monsters.  An example is the use of “whistling arrows” that help warn soldiers of an attacking enemy.

The film had several naysayers in China after its release back in December.  The official newspaper of the Chinese Communist Party called the negative reviews a “vicious and irresponsible” attempt to “grab eyeballs”.  Some of these reviews then mysteriously disappeared from websites.  I’m happy to say that this is a fun, entertaining film that doesn’t overstay its welcome.  Oh, and to be clear, that’s my opinion and in no way was I influenced by an outside party!