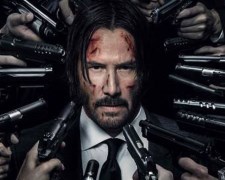 There are lots of ways to become a film director but the path taken by American Chad Stahelski is a great story in itself.  His career began in the early 1990s when he worked as a stuntman on films such as Escape From L.A., Alien: Resurrection and Wild Wild West.  One of his earliest credits was The Crow – the movie where star Brandon Lee lost his life due to an accidental shooting on set.  Stahelski was required to step in as Lee’s replacement (with the help of special effects) for the handful of scenes still to be completed.

Given a small resemblance to Keanu Reeves, Stahelski landed the part of his stunt double on the The Matrix which was shot in 1998.  It’s there where he become friends with Reeves and was amazed by the attention to detail displayed by directors Lana and Lilly Wachowski.

Fifteen years later, Reeves got in touch with Stahelski about a life-changing opportunity.  He’d come across an action script from relatively unknown writer Derek Kolstad and was looking for a director.  He felt that Stahelski’s experience in performing and choreographing stunt scenes made him an ideal fit to sit in the director’s chair for the first time.

John Wick was the end result.  Released back in 2014, the film quietly developed a cult-like following.  It was a little different from the predictable action pieces that emanate from Hollywood and ended up grossing just under $100 million at the global box-office – not bad for a film with a $30 million price tag.  Stahelski had proved his worth and a sequel was put into production.

If you never saw the original, John Wick (Reeves) is a hitman who is practically unstoppable.  After a group of Russian gangsters killed his dog and stole his car, he went on a bloody rampage to get those responsible.  The body count was very, very high.  The film wasn’t all about violent action scenes through.  There’s a charm and sophistication to Wick which makes him likable.  He’s also part of cool James Bond-like community where other hitman help out with weapons and hideouts.

John Wick: Chapter 2 picks up where the last film left off.  Wick is keen to retire and live an ordinary life but he is brought back into action when called upon by Santino D’Antonio (Scamarcio), a cunning Italian crime lord.  Wick has no choice but to comply as D’Antonio once helped him out of a life-or-death scenario.  He’s asked to travel to Italy and kill D’Antonio’s sister.  The reasons are convoluted and not worth explaining.

What follows is another fun, outlandish adventure involving John Wick.  A website called Visu put together a list that shows Wick kills a total of 128 people in this film – up from the 77 in the original movie.  There’s a wide array of weapons including shotguns and assault rifles.  Not everyone gets a bullet.  Some get crushed with a car while others meet their demise thanks to a simple pencil.

It may sound horrible but as an action fan, it’s exciting to watch.  Stahelski and his crew have drawn on their creative juices to craft action scenes that don’t feel repetitive.  There’s something a little different about each one.  As an example, there’s a humorous moment in a subway where Wick is involved in a shootout with a skilled bodyguard but those around them don’t realise as they’re using silencers on their guns.

Wick’s vulnerability also makes him endearing to the audience.  He’s not a cyborg/superhero who waltzes around with an air of arrogance.  He’s skilled but he also takes his fair share of hits.  He spends much of the film hanging on by a thread – walking around with a limp and bloodied face.  The lack of dialogue also adds to his character.  His forlorn expression says more than any words could.

On track to make more than twice as much money as the original, this won’t be the last time we hear from John Wick.