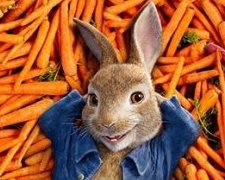 British author Beatrix Potter wrote dozens of books throughout her life but it’s her very first novel for which she is best known – The Tale of Peter Rabbit.  It was first published in 1902, has been translated into numerous languages, and has reportedly sold more than 45 million copies.  Now, for the first time, the adventures of this mischievous rabbit have been adapted for the first time as a big screen movie.

We’re told during the opening scenes that our leading character is a “young rabbit with a blue coat and no pants.”  Peter (voiced by James Corden), along with his fellow rabbits, live in the country and source their food from a backyard vegetable garden.  The farmer (Neill) is furious that his crops are continually stolen and eaten but he’s powerless against Peter and his cunning work.

Everything is upended when the farmer passes away and ownership of the home transfers to his young nephew, Jeremy (Gleeson).  Jeremy is a Londoner who is keen to put the house up for sale but before doing so, he’s intent on eliminating all the rabbits and other creatures who devalue the property with their thieving acts.  It’s at this point where the real mayhem begins.

Brought to the screen by writer-director Will Gluck (Easy A), Peter Rabbit is a mix of animation of live action.  It’s also a distinctively Australian affair with Animal Logic providing the animation, Sydney’s Centennial Park providing most of the setting, and a group of well-known Australian actors contributing to the voices – Margot Robbie, Elizabeth Debicki, Ewen Leslie, Bryan Brown and David Wenham.  Rose Byrne also stars as one of the featured human characters – the kind-hearted, rabbit-loving next door neighbour.

Clocking it a tight 93 minutes, Peter Rabbit is fun and easy to like.  Yes, it’s targeted at children but there’s a surprising amount of humour on offer for the adult crowd.  The animation team have done a stellar job in creating this funny, charming creatures.  Gluck has also selected a bunch of popular current day songs which will be known to most of the audience.

Domhnall Gleeson relishes his cheeky, villainous role but it’s not as one sided as you might think.  A key theme of the film is that we shouldn’t broadly categorise people as “good” or “bad”.  Whether we’re the cute Peter Rabbit or the angry Jeremy Fisher, we all make mistakes and we can all be redeemed.  It’s a nice message for both kids and adults to be reminded of.

After a strong box-office opening in the United States last month, further instalments of Peter Rabbit could soon be in the works.