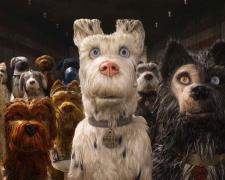 I’ll admit to being a Wes Anderson fan boy.  His screenplays are creative, his characters are memorable, and his cinematography is distinctive.  From Rushmore and The Life Aquatic with Steve Zissou to Moonrise Kingdom and The Grand Budapest Hotel, Anderson makes films, laced with dark comedy, which are easy to watch again and again.

The imaginatively titled Isle of Dogs (think “I Love Dogs”) is another worthy addition on his impressive resume.  Shot using the painfully slow process of stop-motion animation (as he did with Fantastic Mr. Fox in 2009), the film is set in a fictitious Japanese city that is ruled by the controlling Mayor Kobayashi.  When a strong strain of flu infects canines in the area, the Mayor has every single dog in the city banished to the neighbouring Trash Island.  There’s also an ulterior motive at play with the Mayor not hiding the fact that he prefers cats to dogs.

There’s a cute notice at the start of the movie telling audiences that all barks have been translated into English.  This allows us to follow the story from the perspective of the dogs as opposed to the humans.  Much of what transpires occurs on the disgustingly filthy Trash Island.  There’s no clean water and the dogs have to rely on rotten scraps as food.  It’s a wonder that so many have been able to survive for so long.

The crux of the story builds when a 12-year-old boy, Atari (Rankin), steals a plane and travels to Trash Island in search of his long-lost dog, Spots.  Government officials normally wouldn’t show much interest but with Atari being the nephew of Mayor Kobayashi, it becomes headline news.  Security forces are sent in to bring him back home but Atari evades capture and teams up with a group of cunning dogs to help locate the missing Spots.

He’s admired within the industry and Wes Anderson had no trouble assembling a cast for Isle of Dogs.  Scheduling conflicts are often a challenge but in the case of an animated feature, it’s much easier to pull together a big cast as the voices can be recorded on any day at any time.  Some dogs are voiced by long-time Anderson collaborators such as Billy Murray, Jason Schwartzman and Edward Norton whilst others are making their debut such as a Bryan Cranston, Scarlett Johansson and Liev Schreiber.  Most are working for love of the craft as opposed to money given the reported budget of the film was just $17.5 million.

Targeted at both kids and adults, there’s a lot of fun to be had with the story and the mix of both light and dark comedy.  You can smile at some of the long-running jokes (Jeff Goldblum’s dog is quick to pass on rumours) while being surprised by unexpected moments (the fate of a caged dog).  When you throw these cute, likeable characters into an odd world, there’s much opportunity for humour.

Anderson is known for his use of symmetry and that’s illustrated again here with some beautifully framed scenes.  It’s hard to pick a favourite but two moments stand out for me – one involves a chef making sushi and another features a doctor performing a kidney transplant.  There’s also an incredible attention to detail highlighted by the wind subtly moving through the dogs’ fur.  The talented crew deserve huge praise for their work.

Wes Anderson is winless from 6 previous nominations at the Academy Awards but when looking ahead to the best animated feature category at next year’s ceremony, this could be his chance to break that streak and take home a 13.5 inch statuette.  See this film!