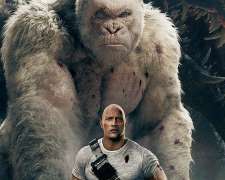 The opening few scenes of Rampage had me thinking this was a gritty, dramatic film about animal testing and the dangers of “playing God”.  Scientists aboard a space station have been genetically modifying the DNA of animals to make them larger and more aggressive.  I’m not exactly sure why but suffice to say it doesn’t end well.  The researchers are brutally killed by their own creation and, to make matters worse, several vials of the DNA-changing gas plummet to the Earth’s surface.

One of them lands within the grounds of the San Diego Wildlife Sanctuary and it is here we meet our leading man, Davis Okoye (Johnson).  A solider turned poacher-killer turned primatologist, Davis’s colleagues describe him as someone more interested in spending time with animals than people.  He’s single, he lives alone, and is devoted his job.  Much of his day is spent interacting and communicating with the gorillas who now call the Sanctuary their home.

This had the makings of a tense action thriller in the same vein as Jurassic Park or Rise of the Planet of the Apes.  Instead, we’re left with a goofy, poorly written movie that doesn’t know what it wants to be.  Things start to head south when the two keynote villains are introduced – a brother (Lacy) and sister (Åkerman) who run the multi-billion dollar company behind the creation of the mutating gas.  They care more about share price than any loss of life resulting from the attacking creatures.

These two characters are exceedingly dumb.  I couldn’t see them successfully running a neighbourhood lemonade stand let alone a cutting-edge, research-driven corporation engaged in wide scale cover-ups and corruption.  There’s a laughable scene when the FBI drop by with a search warrant but they evade suspicion by simply blaming someone else and not handing over all their servers.  Who knew crime and corruption could be so easy?  Their plans to kill the creatures and harvest their DNA also lacked sense.

The heroes in Rampage aren’t that interesting either.  Jeffrey Dean Morgan plays the smug head of an “other government agency” but his focus is more on speaking slow and deliberately rather than actually saving lives.  Naomie Harris plays a genetic engineer who teams up with Davis to subdue the creatures.  There’s a laughably bad sequence where they infiltrate a lab and fumble through some fridges and cupboards in search of the antidote.

Perhaps this film could have worked if framed solely as a comedy.  The writing team have tried to inject humour but the lines are corny and some of the set pieces are too obvious (such as a moment involving Jake Lacy’s character as he tries to escape a building).  It’s like watching the trashy Mega Shark Versus Giant Octopus only with a bigger budget and better special effects.  This wasn’t for me.