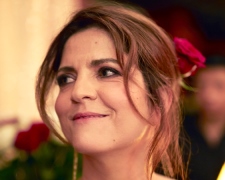 The 2018 Alliance Francaise French Film Festival recently wrapped up after screenings at 10 locations across Australia.  More than 184,000 tickets were sold which is a clear sign of the love and appreciation for French cinema in this country.  A few of the more popular features from the festival will now get a wider release and the first “cab off the rank” is Aurore, the latest vehicle to star the popular Agnès Jaoui (Look at Me, The Taste of Others).

I’m reminded of the saying “life is what happens to you while you’re busy making other plans”.  That seems to be the case for 50-year-old Aurore who has spent the last few decades raising a family but now finds herself alone and unsure what to do next.  She’s separated from her husband, her kids have grown up and become independent, and she’s battling the early stages of menopause (complete with hot flashes).  She works as a waitress in a small café but it’s a struggle to stay motivated given the monotonous work and the remarks of her sexist boss.

The catalyst for change arrives in the form of a childhood sweetheart, Totoche (de Montalembert).  He was Aurore’s first love and they dated as teenagers but for whatever reason, things didn’t work out and they both went their separate ways.  It’s clear that he’s remained on Aurore’s mind based on her reaction when they bump into each other.  Could they possibly fall in love again after more than three decades apart?

As all of this goes on, Aurore is battling to keep other parts of her world in order.  Her elder daughter (Such) is pregnant – a fact she’s not entirely comfortable with given her daughter’s relatively young age.  There’s a little tension between the two as a result.  Her younger daughter (Roy-Lecollinet) is discovering love for the first time and with it, a clouded judgement.  There’s a humorous moment where Aurore comes home and hears them having sex in the bedroom upstairs.  Her best friend, Mano (Arbillot), is borderline deranged but her comedic antics leave a smile on her face.

There’s no huge twist or ground breaking revelation here.  This a character study about an ordinary woman looking to restart her life.  She makes a few mistakes and errors of judgement along the way but she’s likeable, warm-hearted and endearing.  She’s the kind of character who deserves a happy ending.  It’s a nice performance from Agnès Jaoui who works well under the guidance of director Blandine Lenoir.

Blending comedy, drama and romance, Aurore is easy to watch and easy to like.