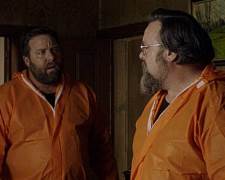 In compiling a list of Australia’s best comedic films, one movie that deserves inclusion is Kenny.  The creation of two brothers, Shane and Clayton Jacobson, the film told the tale of a loveable guy who rented portable toilets for use at concerts, carnivals and sporting events.  The film spent 13 weeks inside the top 10 at the Australian box-office and grossed just under $8 million – more than any other Aussie film in 2006 with the exception of the animated blockbuster Happy Feet.

That helped open a few doors for the largely unknown Jacobson brothers.  Shane continued to act and landed roles in productions such as Charlie & Boots, Oddball and Jack Irish.  Clayton picked up the occasional acting gig while churning out a few short films.  He was also involved in the short-lived spin-off television series, Kenny’s World.

Despite the success of Kenny and a myriad of ideas, the Jacobson brothers struggled to get a follow up feature film off the ground.  That was until they came up with an original way of obtaining finance.  Rather than make a movie and try to sell it to cinema owners/managers, they were able to convince the cinemas to come on at the start as “investors”.

As an example, if a cinema could stump up $20,000 in funding, they would have special advertising and a red-carpet premiere with both brothers attending.  They would also share in any profit if the film became a smash hit.  Aside from generating the necessary cash, the other big advantage of this financing model is that it guaranteed cinema screens – a tough ask for the average low-budget Aussie film when trying to compete against Hollywood blockbusters.

So is the film worth seeing?  The answer is a mild “yes”.  It’s the fictional tale of two brothers (played by Shane and Clayton) with a lot on their mind.  Their mother has terminal cancer and, rather that worry about how to make her final months as great as possible, their #1 priority is her will.  Custody of the family home will transfer to their step-father and the brothers are worried that he’ll screw them over and give them nothing when it’s ultimately sold.  Rather than sit down and talk it through, they come up with an unorthodox solution – to kill the step-dad.

Brother’s Nest is broken up into two distinct parts.  The first half is all about planning.  The brothers talk through a number of scenarios and role play the impending murder.  They’ve even come up with a murder “to do list” to make sure everything is in place and nothing goes wrong.  The second half is about the execution.  Things don’t go as expected and the film takes a few unexpected twists.

This is a dark, warped comedy.  You’ll have a few laughs with these not-so-bright characters during the early scenes as they argue about almost everything.  One is meticulously prepared while the other doesn’t seem to care.  Given the worst thing they’ve ever done in life is a dodgy tax return, it makes you wonder if they’ve got the guts to follow through.

It’s at this point where the tone shifts dramatically and, somewhat reminiscent of a dark Coen Brothers flick, will catch some audiences off guard.  The arrival of two new characters, played by Kim Gyngell and Lynette Curran, give the film a much needed spark.  You’ll forget about the slightly drawn-out opening and be drawn into the intense conclusion.  The fact that it feels so plausible adds to the uncomfortable vibe (in a positive way).

It won’t be as iconic as Kenny but Brother’s Nest still makes a strong mark.