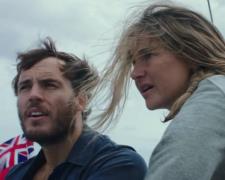 Making a lost-at-sea movie is not an easy assignment.  You’ve got a single, limited location and a small number of characters.  Director J.C. Chandor took the genre to its most extreme in 2013 with All is Lost.  It featured just one person (Robert Redford) and almost no dialogue.  There’s more than one way to skin a cat as illustrated by other filmmakers who have successfully used plot devices to help keep audiences engaged.  Cast Away had Tom Hanks talking to a volleyball while Life of Pi brought in animals and a spiritual theme.

Based on a true story that took place in 1983, Adrift sets its scene very quickly.  Tami (Woodley) is a 23-year-old woman who wakes up in the cabin of a small yacht.  Her head is bleeding, there’s water in cabin, and there’s no sign of her boyfriend.  It’s clear she’s in the middle of the ocean and with the boat badly damaged and the radio beyond repair, her odds of survival don’t look great.

Guided by the screenplay, director Baltasar Kormákur (Everest) uses a familiar method to help tell this story – flashbacks.  We slip back 5 months and learn that Tami is an adventure-seeker who had travelled from her home in the United States to Tahiti in search of fun times.  She picked up a small job working in a harbour and it’s there she met Richard (Claflin) – a slightly older man with a love of the sea who had built his own boat from scratch.

The film is split fairly evenly between the two timeframes.  On the stricken yacht, we follow Tami as she battles the elements and tries to guide the boat to land.  Most viewers will be asking themselves the same questions.  Where will she find food and water?  How does she know what direction to head?  What happened to her boyfriend?  These questions are answered for the most part but it’s not offering us anything we haven’t seen in similar survival flicks.

The other half of the movie is structured as a love story while also filling in plot gaps.  There are a few cheesy rom-com lines such a moment where Richard opens up about his feelings and tells Tami that he’s never met anyone like her before.  She reciprocates with something similar.  Of more interest is the early part of their voyage and the huge storm that engulfs the yacht and causes all the damage.

It’s hard to be too critical given this is based on actual people and events but there’s a contrived nature to certain plot points which makes the story difficult to fully invest in.  An example is a sequence where a starving Tami has the chance to kill a fish but has hesitations because she’s a vegetarian.  Really?  We’re not talking about cannibalism here.  Would someone at death’s door turn down the chance of food because of their moral beliefs?  Tami ultimately makes the right decision but it’s still a strange part of the movie that’s trying to create unnecessary drama.

Kudos to Shailene Woodley (The Descendants) for a strong leading performance.  The best scenes are those on the boat and credit goes to the make-up artists who have done a stellar job demonstrating the effects of the sun, wind and rain on her tortured body.  The lovey-dovey scenes with Woodley and Sam Claflin (The Hunger Games) weren’t as convincing and felt targeted at overly romantic, idealistic teenagers.

Adrift has tempted me to do more reading about the real-life people involved (so that’s a good thing) but as a standalone movie, it’s not as gripping as you might expect.