Review: Ant-Man and the Wasp 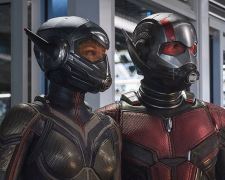 There’s no denying the success of the films in the Marvel Cinematic Universe over the past decade.  There have been 19 films which have grossed just under $17 billion USD at the worldwide box-office.  That said, there’s one gap which has become more noticeable in recent years.  While there are plenty of supporting roles for female actors, the title character in every Marvel film has been a man – Iron Man, Spider-Man, Ant-Man, The Incredible Hulk, Thor, Captain America, Doctor Strange and Black Panther.  Zoe Saldana was terrific in Guardians of the Galaxy but that was a “team” title and if we’re being picky, Chris Pratt still had top billing.

The streak finally comes to and end with Ant-Man and the Wasp.  Well, kind of.  The Wasp has to share the title with her male counterpart.  It’s a film where a viewing (or reviewing) of earlier movies is strongly recommended.  There are many references to events that took place in Ant-Man (released in 2015) and Captain America: Civil War (released in 2016).  For starters, the film opens with Ant-Man under house arrest by the authorities after some bad stuff which took place in Civil War.

This is a busy sequel with numerous sub-plots in play.  Renowned physicist Hank Pym (Douglas) lost his wife (Pfeiffer) 30 years ago in the “quantum realm”, some kind of alternate universe where people are really small and other organisms are really big.  Hank thought she was lost forever but evidence suggests she may still be alive and trying to find a way home.  He’s been secretly developing a machine that would allow him to enter the realm and rescue his wife.

Hank may be doing all the hard work but there are two people aware of his activities who are looking to get their hands on his technology.  The first is the aptly named Ghost (John-Kamen), a mysterious woman who has the ability to pass through solid matter.  She’s a tough adversary because she can walk through walls and evade any punch.  The second is a silly, stereotypical villain named Sonny (Goggins).  He comes complete with a team of dumb henchmen and is driven by nothing else but wealth and power.

So where do our two heroes fit into the puzzle?  They’re working alongside Hank Pym to subdue these adversaries and protect his machine.  The film has a similar tone to the earlier flick in that it’s light and comedic.  Paul Rudd gets the best of the one-liners as the likeable Ant-Man.  He humorously comes across as someone better suited to stand-up comedy than saving the world.  Evangeline Lilly reprises her role as the Wasp and is the more serious, level-headed member of the duo given she has so much at stake.

The storyline is too chaotic in places with some elements (such as Ant-Man’s relationship with his daughter) struggling to contribute to the broader narrative.  I also admit to being confused by the scientific and technological references.  Characters talk about their plans but much was going over my head.  There’s a funny gag where even Ant-Man shakes his head with the numerous references to the term “quantum”.

While the screenplay isn't as strong as it could be, the action scenes deliver in a big way.  We’ve got two heroes who can change their size, a villain who can walk through anything, and a remote control that can shrink cars.  It’s a recipe for some cool, fun, creative action pieces.  The visual effects are top-notch and you’ll need to be paying close attention to keep up.

Given the not-so-rosy events that took place at the end of The Avengers: Infinity War, the Marvel Cinematic Universe now takes a break for 8 months and forces us to wait for two very big films – Captain Marvel in March 2019 (with Brie Larson) and the still untitled Avengers follow-up in May 2019.  I’m as interested as anyone to see where this franchise goes next.