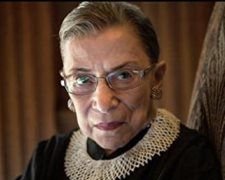 The role played by the Supreme Court in the United States cannot be under-emphasized.  It consists of 9 judges who are nominated by the President and confirmed by the 100-person Senate.  Throughout its history, the court has made landmark decisions on items including discrimination, abortion, euthanasia, civil rights, capital punishment, freedom of speech and freedom of religion.  Their decisions have played a major role in shaping the current day United States.

She still finds it hard to believe but over the past few years, the oldest of the Supreme Court judges has developed a cult-like following with young lawyers and progressive libertarians.  85-year-old Ruth Bader Ginsburg was nominated by President Bill Clinton in 1993 and confirmed by an almost unanimous margin in the Senate.  Since that time, she has presided over important decisions such as the outcome of the 2000 election (George Bush v Al Gore), the rights of citizens to possess firearms at home for self-defence, and the validity of same-sex marriage.

In recent times, she has become known as a “bad-ass dissenter”.  Ginsburg has always taken a stand against discrimination and inequality but those views are not shared by the increasing number of conservative judges which sit on the Court.  Despite her old age, soft voice and frail disposition, she still churns out beautifully articulate legal opinions that are soaked up by budding lawyers, civil rights activists and other progressive individuals.

RBG is an insightful documentary that takes us inside of the world of this iconic figure.  It features interviews with Ginsburg’s family and friends where they talk about her ridiculous work ethic.  There was a part of her life where she’d get 2 hours sleep each night during the week and then catch up by sleeping all weekend.  The film also delves into her upbringing and introduction to the law.  When she studied law at Harvard in the 1950s, just 2% of her students were female and despite her exceptional grades, she struggled to land a job after graduating.

There’s so much material to cover but for me, the emotional highlight was seeing Ginsburg interrogated and subsequently confirmed by the Senate.  It’s hard to believe that someone so shy and quiet could win the approval of President Clinton at a time when many other names were being thrown around.  There’s a great interview in the film with Clinton where he talks about his thought process and the influence of Ginsburg’s passionate husband.

In bringing the film together, RBG is the creation of two skilful directors.  Betsy West spent 20 years working as a producer for ABC News in the United States and became a senior vice president at CBS News.  Julie Cohen has made a number of documentaries which have screened at film festivals across the globe.  It’s clear they have a love for their subject matter.  It’s also a nice touch that an all-female crew has pulled this film together.  I’m speaking of not just the directors but also the producers, editors, cinematographer and composer.

There’s a great line at the start where Ginsburg humorously remarks that “I’m 84 and everybody wants to take a picture with me.”  This film will only add to her notoriety and I’d predict that many more people will be after photos in the years to come.