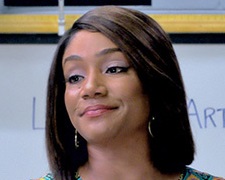 Director Malcolm D. Lee made one of the best comedies of 2017.  Girls Trip was about four middle aged ladies who got together for a fun, boozy weekend at a music festival in New Orleans.  It had strong characters, memorable scenes and many great one-liners.  Aside from the laughs, the film also had a big heart as it delved into the subject of long-term friendships and how they change and evolve over time.

The director may be the same but none of the adjectives and descriptors used in my opening paragraph apply to Night School.  It’s a woefully dull comedy that fails to extract any laughs from its silly premise.  As the film opens, we learn that Teddy Walker (Hart) never officially graduated from high school 17 years ago.  He was all set to complete the final exams for his General Equivalency Diploma (GED) but he had a panic attack and fled the examination hall.

It hasn’t held him back though.  Thanks to his natural ability to schmooze customers, Teddy has become a very successful salesperson at BBQ City.  There’s a wall which honours the “employee of the month” and, probably to the disappointment of all the other staff, Teddy’s photo is the only one that appears.  That’s how good he is.  The juicy commissions help pay for his expensive taste in cars, food and fashion.

His cruisy lifestyle comes to an abrupt halt when the BBQ City store explodes (a bizarre scene in its own right), the store owner flees the country, and Teddy finds himself unemployed.  A good friend agrees to give him a plumb job in a financial services firm but before he can be appointed, Teddy must attend night school and get his GED.

This leads into the introduction of Carrie (Haddish) – a disgruntled, underpaid teacher who has taken on a group of misfits in a night school class so she can afford luxury expenses such as “rent and antibiotics”.  Her class consists of a conspiracy theorist, a drug user, a religious mother, an incarcerated criminal, a dim-witted father, and a waiter-turned-Uber driver.  Teddy’s efforts to sweet talk Carrie into giving him an easy ride amount to nothing.  If he’s going to get that GED, he’s going to have to study and work hard.

There are a bunch of other subplots but like the main show, they’re lacking when it comes to humour.  Teddy accepts a part-time job at an overly religious fast food restaurant and has to lure customers by wearing a chicken suit.  There’s a baseball-bat loving principal (Killam) who tries to sabotage Teddy because he bullied him in high school.  There’s a sequence where Teddy and Carrie end up in a boxing ring to help with his learning difficulties.  It’s all so random and I couldn’t care less what became of these characters (unlike Girls Trip).