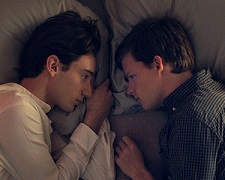 In 2004, 19-year-old Garrard Conley spent two weeks at a gay conversion facility in Memphis, Tennessee at the firm request of his religious parents.  The concept may sound farcical but roughly 700,000 people in the United States, many of them teenagers, have been subjected to this dubious practice going back to the early 20th Century.

Conley first wrote about his experiences as part of a college assignment and, realising how shocked and fascinated his fellow classmates were, it inspired him to write a full memoir.  Boy Erased was published in 2016 and the film rights were quickly snapped up by Focus Features – a company with a commitment to telling LGBT stories having previously been involved with films such as Brokeback Mountain, Milk, Beginners and Dallas Buyers Club.

Boy Erased opens with powerful words from its lead character – “I wish this had never happened but sometimes I thank God that it did.”  This signals to audiences that the film will be tough to watch at times but there is light at the end of the tunnel.  The fact Conley survived the experience and published his book is further proof.  It’s also worth noting that Conley has been renamed “Jared Eamons” for the purposes of the movie.

It’s not the first time this subject matter has been explored this year.  The Miseducation of Cameron Post won the Grand Jury Prize for US Drama at the Sundance Film Festival and received a limited release in Australian cinemas two months ago.  In that film, the protagonist (played by Chloë Grace Moretz) was able to deal with the absurdity of gay conversion therapy by forming a valuable friendship with two fellow “patients” and plotting a means of escape.

Boy Erased is a slightly different story in that Jared is a more isolated character who doesn’t have a group of friends to fall back on.  Writer-director Joel Edgerton (The Gift) effectively uses flashbacks to show how the questionable therapy has impacted Jared’s personality and spirit.  He was once a chatty, outgoing teenager but as a result of the treatment, he’s become quiet and reserved.  It’s heartbreaking to watch this young man supress his emotions and have no one to reach out with wise words and a helping hand.  Academy Award nominee Lucas Hedges (Manchester by the Sea) plays the character with great skill.

The inner workings of the facility and its “clients” will be an eye-opener to many.  All of Jared’s personal belongings are confiscated on entry and he’s subjected to a very strict set of rules.  He cannot make physical contact with any other person, he must always be accompanied by a member of staff when going to the bathroom, and he cannot discuss the treatment with anyone from the outside (including his parents).  There’s also a strong religious ethos which is continually reinforced by the head therapist (played by Joel Edgerton).

It’s repetitive during the second act but the themes come through strongly during the emotional finale.  The most interesting character is Jared’s mother (played by Nicole Kidman) as she tries to reconcile religion with reality.  She wants to be loyal to her religious husband (Russell Crowe) who is protective of his reputation as a Baptist pastor.  However, she also sees the damage being done to her son as he withdraws further and further into his shell.

The world is a messed-up place but Boy Erased provides hope that common sense can sometimes triumph over stupidity.