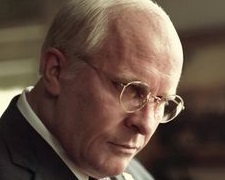 Surveys vary but the general consensus is that Americans have grown increasingly distrustful of politicians and sceptical of the political process over the past few decades.  The same can be said of many other countries around the world including here in Australia.  Many factors are to blame but if you’re looking to point the finger at one group in particular, politicians have done themselves no favours.  Too many are driven by self-interest as opposed to doing what is best for society as a whole.

Vice is a damning portrayal of Dick Cheney (Bale), the man who served as U.S. Vice President from 2000 to 2008.  It’s almost too hard to believe.  It would have us think he used President George W. Bush like a puppet, had unlimited power thanks to the help of crafty lawyers, and it all began thanks to some inspiring words from his wife, Lynne (Adams).  He’d give a few Bond villains a run for their money.

So how much is true, how much is embellished, and how much is creative fiction?  We’ll never know for sure.  A humorous opening scene suggests it was hard to put together a complete picture of Cheney given he was one of the “most secretive leaders in history” (although that trait doesn’t come through during the movie as he interacts with a LOT of people).  The film, in my subjective opinion, does over-state Cheney’s influence in places but on the whole, its broad themes about the manipulation and corruption that exist within political circles are accurate.

There’s no arguing that, despite a myriad of health issues, Cheney has lived a long, successful and interesting life.  His career took shape in the late 1960s when he landed a job in the office of Congressman Donald Rumsfeld (Carell) and was given three tips – keep your mouth shut, do as your told, and be loyal.  He followed those instructions and by 1975, he’d become the youngest person in history to be appointed White House Chief of Staff (at the age of just 34).  That was only the beginning.

Writer-director Adam McKay (The Big Short) has struggled with the breadth of material on Cheney.  There’s a 2-minute subplot which strongly implies Lynne’s mother was murdered by her father.  There’s another quick sequence where Cheney shoots a Texas attorney while out hunting.  These are serious moments which could be a movie in their own right but McKay doesn’t have time to explore the truth or characters’ motivations.  Before these events have had a chance to soak in, we’ve raced onto something else.

The final third of movie, which focuses on Cheney’s time as Vice President, is the strongest part and it’s likely to generate the biggest audience reaction.  We see Cheney’s views on topics such as tax reform, privacy and torture and the way he was able to sell his ideas to the American people through the use of secret focus groups.  Most shocking is the lead up to the war in Iraq and its aftermath.

Christian Bale (The Fighter) delivers another career-defining performance in the lead role.  It’s one thing to mimic Cheney’s speech and mannerisms but Bale goes much further in creating an intriguing anti-hero.  Amy Adams (Arrival) goes missing during the film’s second half but she’s just as good as Cheney’s passionately loyal wife.  Both are in line for Academy Award nominations next month.  I was less impressed with Steve Carell and Sam Rockwell who come across as over-the-top caricatures as opposed to nuanced, real-life people.

McKay has stuck with the same directorial style that worked successfully for The Big Short.  The film breaks through the fourth wall (thanks to a curious narrator), there’s a bunch of Hollywood cameos (the Alfred Molina one works best), and there’s plenty of offbeat comedy (such as a mid-film credits sequence) to make sure the material doesn’t get too heavy.  He’s taking the subject matter of politics, which people tend to avoid in movie theatres, and getting his message across by making it simple and sexy.  It’s not a bad approach.

Vice won’t please everyone but it’ll entertain its fair share.