Review: How to Train Your Dragon: The Hidden World 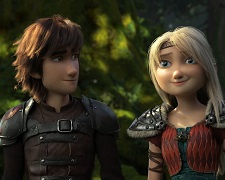 It’s been a strong, successful run for the How to Train Your Dragon franchise.  Both the original and follow-up sequel earned Academy Award nominations for best animated feature – a feat only matched by Shrek and Kung Fu Panda since the category was created back in 2001.  Money talks too.  The two films pulled in a combined $1.1 billion USD at the world-wide box-office which all but guaranteed another sequel.

As a quick recap, the first How to Train Your Dragon, released in 2010, was the tale of a young boy who captured and then assisted a cheeky young dragon named ‘Toothless’.  He was able to prove to his father and other Viking elders that dragons were their friends as opposed to their enemies.  The 2014 sequel took a more action-packed approach as the Vikings and dragons defended their home against the exploits of a sinister dragon hunter.

How to Train Your Dragon: The Hidden World begins with a discussion topic that has been doing the rounds, rightly or wrongly, in Australian politics – overpopulation.  The colourful city of Berk has become the “world’s first dragon-Viking utopia” but there’s a limited amount of space and questions are being asked about its long-term sustainability.  There’s an old mariner’s myth about a hidden world where dragons originated and so our illustrious hero, Hiccup (Baruchel), flips through a few maps and goes in search of its location.  The end goal is to find somewhere for the dragons to live in peace without the risk of further attacks.

A villain is required and this is where Grimmel the Grisly (Abraham) enters the picture.  His view of the world is that humans are the dominant species and all other creatures are superfluous.  He hunts dragons purely for the sport and across his lifetime, he and his henchmen have killed many winged creatures.  Hiccup is warned that Grimmel is not to be underestimated and that’s especially so given that Toothless is his latest target.

The Hidden World is a little too chaotic in places but there’s more than enough heart and sentimentality, particularly during the finale, to win over audiences.  It finds the right balance between action and story.  There are also a few good laughs highlighted by a great scene involving the chatty, over-stimulated Ruffnut in a jail cell (hilariously played by Kristen Wiig).  If there’s a weakness, it’s with the bad guy.  Grimmel is a one-dimensional, stereotypical villain who keeps gaining the upper hand and throwing it away for silly reasons.

The franchise is starting to show signs of repetition and perhaps that’s part of the reason why The Hidden World has been marketed as the final instalment.  Kids will enjoy another chance to see these fun characters and it provides a nice culmination to the series but for me, the original How to Train Your Dragon remains the best.

You can read by interview with star Jay Baruchel by clicking here.