Review: On the Basis of Sex 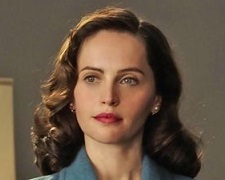 She’s well known within the legal fraternity but it’s kind of cool that at the age of 85, Ruth Bader Ginsberg is finally getting her “15 minutes of fame” in Hollywood.  Last year, filmmakers Betsy West and Julie Cohen made a wonderful documentary entitled RBG that followed Ginsberg’s upbringing, career, and time as a Justice on the U.S. Supreme Court.  It’s favoured to win the Oscar for best documentary feature at the Oscars later this month.

Now, less than a year later, we have a biopic about Ginsberg with Oscar nominated actress Felicity Jones (The Theory of Everything) in the lead role.  I’ll admit to being sceptical about this production.  Given the quality of the documentary and its in-depth interviews with Ginsberg, what could a dramatic movie possibly add that would make it more informative and engaging?

Screenwriter Daniel Stiepleman, who happens to be the nephew of Ruth Bader Ginsberg, has found an answer.  Rather analyse her whole life, as was done in the documentary, Stiepleman has chosen to focus on a court case argued by Ginsberg in front of the U.S Court of Appeals for the Tenth Circuit in 1972.  It was the only time in her career that she argued alongside her husband, Martin (Hammer), a successful tax lawyer in his own right.  Pointing the spotlight on just one case allows Stiepleman to provide more specifics when it comes to the importance and significance of her work.

Ginsburg had long pushed for gender equality and women’s rights without success.  The culture was changing in the United States but the courts, weighed down by decades of precedence that judges refused to overturn, were lagging behind.  This is where she got creative.  She took on the case of a man who had been discriminated against because of his sex.  If successful, it would set a new precedent that could be relied upon in similar cases involving women.

The person at the centre of the legal proceedings was Charles Moritz - an unmarried man who worked full-time at a publishing firm.  He had employed a carer to tend to his ailing mother while at work but the Internal Revenue Service had denied him a tax deduction for such costs.  American tax legislation stated that only a woman is entitled to a tax deduction for expenses related to the care of an invalid parent.  It was clearly written under the false presumption that men would never to incur such costs because they would always have a wife at home to take care of such matters.

This is a powerful, eye-opening story that reminds us about the inroads that have been made when it comes to gender equality in recent decades.  There’s a brief introduction set in the 1950s where we see Ginsburg grilled by the Dean of the Harvard Law School (Waterston) as to why she’s taken a place that could have gone to a man.  There’s another scene after where she goes to a job interview for a law firm and is told she should be more worried about having kids and attending bake sales.

Felicity Jones gives a fine performance in portrayal Ginsburg as a determined, passionate woman who, despite being subject to continual discrimination herself, was unrelenting in her quest to overturn archaic laws that didn’t treat men and women as equals.  Importantly, the film doesn’t try to portray her as a saint.  It acknowledges that she did make a few small missteps along the way (as we all would) but she was able to learn from those mistakes and improve her powers of persuasion.

Directed by Mimi Leder (Deep Impact, Pay it Forward), On the Basis of Sex makes for great viewing.