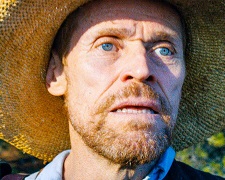 It was roughly 15 months ago that Australian audiences had the chance to admire the first fully painted animated film, Loving Vincent.  It was set in the late 19th century and followed a postman who was intrigued by Vincent van Gogh and was investigating the circumstances that led to his apparent suicide.  The unique visuals and unorthodox narrative (telling it from the perspective of the postman) made it one of the year’s most original films.

The style is different but there’s still a sense of familiarity with At Eternity’s Gate, a live-action release that also delves into the final years of van Gogh’s life.  It’s brought to the screen by Oscar nominated director Julian Schnabel (The Diving Bell and the Butterfly) and you only have to look at his resume to see his passion for creative activity.  He has made films about New York Street artist Jean Michel Basquiat (Basquiat), Cuban poet Reinaldo Arenas (Before Night Falls) and singer-songwriter Lou Reed (Berlin).

If you’re unfamiliar with Vincent van Gogh, a quick internet search provides plenty of fascinating titbits about his life and legacy.  He severed his own ear with a razor blade, he spent time in a mental asylum, and he completed hundreds of paintings and drawings.  When he died in 1890 at the age of 37, van Gogh was near-penniless man who had only sold one painting in his entire career.

It wasn’t until after his passing that the world became enamoured with his toil.  One of his most famous works, Portrait of Dr. Gachet, was purchased at an auction house in 1990 for $82.5 million USD.  The Starry Night is another iconic, near-priceless painting which can be seen by those visiting the Museum of Modern Art in New York City.  Other works include Irises, Sunflowers, and the appropriately titled Self-Portrait with Bandaged Ear.

It’s clear that Schnabel doesn’t want this to be a by-the-book history lesson about van Gogh.  He wants to dig deeper and explore the reasons for his incredible talent.  What drove him?  What made him tick?  The first half of At Eternity’s Gate is particularly impressive as we watch van Gogh (Dafoe) go about his craft.  He looks for the perfect location, sits down with a pencil or paintbrush, and then pours every ounce of energy into his creation.  Schnabel keeps the dialogue to a minimum and, like a good painting, lets the visuals do the talking.

The second half is less compelling.  The film delves into van Gogh’s fractured, tortured mindset during lengthy scenes where he speaks with a doctor and then later with a priest (Mikkelsen).  It feels like van Gogh is trying too hard to explain his thoughts and it becomes tiresome.  That said, it’s hard to say a bad word about Willem Dafoe who has earned his 4th Academy Award nomination for his fervent performance.

Shot on location in the same French towns visited by van Gogh, At Eternity’s Gate allows us to reflect on the life of this brilliant artist but lacks something powerful to take away.