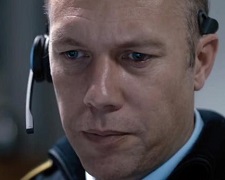 A Danish film about a guy who sits at a desk in an office and talks on the phone for 80 minutes.  It may sound dreadfully dull but The Guilty is one of the best releases of 2019.  I’m not the only one who thinks that!  It won the Audience Award for World Cinema (Dramatic) at the 2018 Sundance Film Festival and it made the 9-film shortlist for the best foreign language film category at this year’s Oscars (it was unlucky to miss a nomination).

Directed by relative newcomer Gustav Möller, the film delves into an occupation seldom explored on screen – the emergency call-takers who receive and process phone calls when people are looking for police, fire and/or ambulance services.  Asger (Cedergren) normally serves as an experienced police officer but we learn during the opening scenes that he’s been reassigned to the call centre pending an upcoming court case (something went wrong in the field).

It’s clear that Asger doesn’t want to be there.  It’s the end of a lengthy shift, he’s tired and he’s got other things on his mind.  That changes when he receives a call from a woman who has been abducted by her ex-husband.  She speaks in a cryptic manner because the ex-husband, sitting beside her in the front seat of their vehicle, thinks that the woman is talking to her 6-year-old daughter.  Asger is able to gauge the seriousness of the situation through a series of “yes” or “no” questions so the ex-husband is none the wiser.

Asger immediately passes this information onto the local police officers.  That’s all he is required to do and if following his job description, he should sit at his desk and wait for the next call to come through.  That’s not how it plays out though.  Given his background as a police officer, Asger has a strong desire to take matters into his own hands and help this woman.  He calls her home to speak with the 6-year-old daughter and it even reaches the point where he’s calling the mobile phone of the ex-husband.

What makes The Guilty so thrilling is that everything is shown from Asger’s perspective.  We don’t get to see events unfold outside his office and we don’t get to see the characters that he’s interacting with on the phone.  It helps us relate to what life is actually like for an emergency call-taker.  They must gather information as quickly as possible, assess the magnitude of the situation, and often calm the emotions of the person they’re speaking with.  There’s a lot of pressure that’s compounded by the fact they can’t see what’s happening at the other end of the phone line.

The Guilty will have you hooked from the opening scene to the closing credits.  There’s so much to think about.  The fate of the abducted woman is important but the more interesting element is Asger and his actions.  He’s clearly a flawed character who has made mistakes in the past and seems to be making more and more as the film progresses… but is it possible that his unorthodox, emotion-driven approach will still achieve a positive outcome?

Given the strong, original premise, a production company based in Los Angeles has snapped up the rights and intends to make an English language version with Jake Gyllenhaal in the lead role.  You’re welcome to wait for its release but if you do, you’ll be missing this riveting piece of Danish cinema.