Review: Fighting with My Family 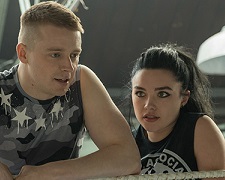 Two weeks ago, there was an interview doing the rounds on social media with Adam Silver, the chief executive of the National Basketball Association in the United States.  He said that the outside world sees all the “fame and money” associated with professional sport but in his one-on-one conversations with basketball players, many of them felt unhappy and isolated.  They have the same problems as everyone else (e.g self-confidence issues, family issues) but with the added pressure of the public’s continual interest (complete with taunts on social media).

Based on a true story, Fighting with My Family delves into this subject through the eyes of a young girl, Saraya (Pugh), trying to forge a career in the sport of professional wrestling.  In the film’s first half, she’s a feisty teenager from Norwich, England who is falling in love with the sport and simply having fun.  It’s how it so often begins with young kids.  They’re not thinking about celebrity and fortune.  They’ve engaged with the pastime purely because they enjoy it.

It helps that Saraya is from a family who has a similar admiration for the sport humorously described as “soap opera in spandex”.  Her parents (Frost and Headey) run a small gymnasium and provide wrestling lessons to other kids in the area to help keep them off the streets.  Her older brother, Zak (Lowden), trains religiously and has dreams of making it professionally in the WWE.  Together, they all ride around in a rundown van putting on shows for small, passionate crowds in the local community.

The tone shifts significantly in the film’s second half when Saraya is discovered by a talent scout (Vaughn) and gets a life-changing opportunity to travel to the United States and train with the next generation of WWE athletes.  It may sound like the stuff of dreams but Saraya, now going by the stage name of ‘Paige’, quickly discovers the downsides of being a professional athlete.  She’s exhausted by the training, she’s missing her family back home, and she’s grappling to make friends given the intense competitiveness of coaching sessions.  The sport which once made her so happy… now makes her sad and lonely.

Emmy winning writer-director Stephen Merchant (The Office) didn’t know much about the world of professional wrestling but that changed when Dwayne Johnson sent him a copy of The Wrestlers: Fighting with My Family, a 45-minute British television documentary that first aired in 2012.  He was drawn in by the story’s varied emotions and after immersing himself in the world of WWE, he came up with this worthy screenplay.  It’s a fitting tribute to the source material and features a well-balanced mix of comedy, drama and suspense.  I was surprised by the number of genuine laughs (Merchant helps with his own cameo).

You could know next-to-nothing about wrestling and still be enthralled by this eclectic group of characters.  23-year-old Florence Pugh (Macbeth) does an outstanding job illustrating the contrast between Paige’s tough, confident exterior and her doubtful, insecure interior.  It’s a subplot that could easily have been overlooked but Jack Lowden (Dunkirk) is equally impressive as the older brother who struggles to watch his sister succeed while his own dreams dissipate.

I have to smirk when looking at the poster for Fighting with My Family and seeing Dwayne Johnson feature as the most prominent character.  The reality is that he only makes a small cameo (as himself) but given his broad box-office appeal, it’s hard to blame the distributors for trying to use his presence to sell tickets.  Given my admiration for the film, I can only hope it works!