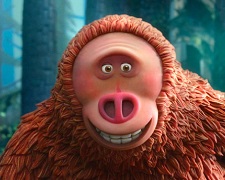 The Easter school holidays are upon us (later than usual this year) and if you’re taking the kids to the cinemas over the break, the best choice is Missing Link.  It’s the latest stop-motion animated film from Laika, a studio with an impeccable track record.  They’ve made four films to date (Coraline, ParaNorman, The Boxtrolls, Kubo and the Two Strings) and all four have been nominated at the Academy Awards for best animated feature.  Missing Link is a strong chance of continuing that streak.

Hugh Jackman voices Sir Lionel Frost, a posh British explorer who has the reputation of being a “monster hunter”.  In the opening scene, he snaps a photo of the rare Loch Ness Monster but in doing so, he risks the life of his loyal assistant who nearly ends up as food.  This is Lionel is a nut shell – he’s an interesting guy with lofty, world changing ambitions… but he’s also self-centred and fails to see the negative impact his actions have on others.

As part of a competition to prove himself to other doubting explorers, Lionel heads off to the United States to find evidence of Bigfoot.  He’s successful (it doesn’t take long at all) but the creature he finds is not the creature he envisioned.  Yes, Bigfoot is 8 feet tall with thick fur and large feet… but this Bigfoot (voiced by Zach Galifianakis) can also speak English and write letters.

The pair become friends but that’s largely the result of a business proposition.  The insecure, self-conscious Bigfoot, who is given the name of Mr. Link, admits to being lonely (there’s just one of him) and he’d love to travel to the Himalayas to meet a series of Yetis and forge a new life for himself.  Lionel agrees to take him there and in return, Mr. Link will provide him with evidence of his existence (photos, teeth, hair samples) which Lionel can take back to London to win the contest.  They are joined by Adelina Fortnight (Saldana), a widower looking for a fresh adventure.

This is a fun, nuanced story filled with great characters.  Mr. Link is on the autism spectrum in the sense that he struggles to understand humour and metaphors.  As an example, there’s a moment where Lionel suggests a locked window be “cracked open” to let in a breeze and so Mr. Link does just that – throwing an object and smashing the glass.  It’s a joke used repeatedly but writer-director Chris Butler finds a way to make it just as funny each time.

You’d expect nothing less from Laika but the animation is superb.  When you think about the fur on Mr. Link’s body and the way it moves from shot-to-shot, it’s no wonder that the film took 5 years to complete from development through to the editing room.  There’s also a seamless blend of stop-motion (used to create the long-faced characters) and visual effects (used to create the backgrounds).  Some cool transitions between key scenes add a dash of polish.

Described by Chris Butler as “Indiana Jones meets Sherlock Holmes meets Planes, Trains and Automobiles”, Missing Link has everything you need in an animated feature.  Hugh Jackman sounds like he had as much fun making the film as I did watching it.