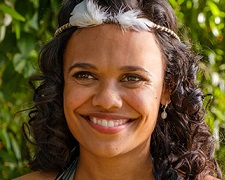 When crafting a romantic comedy, you can try to stay within the realms of realism or you can go for a full-blown farce.  Writers Miranda Tapsell and Joshua Tyler have gone with the second option for Top End Wedding.  Inspired by some of the crazy rom-coms we see coming out of the United States, they’ve put an Aussie flavour on the genre with a Northern Territory setting and an indigenous leading lady.

Lauren (Tapsell) is successful big-city lawyer based in Adelaide who is ticking all the boxes in terms of career progression.  She can speak French, she has a great rapport with clients, and she’s happy to put in very long hours for the betterment of the firm.  It’s at this point where things start to get a little haywire.

Lauren recently got engaged to her long-term boyfriend, Ned (Lee).  That’s good.  Sadly, Ned is withholding the fact that he’s quit his job and is now unemployed.  That’s bad.  Lauren’s boss, dubbed ‘Cruella de Vil” because of her domineering nature, oddly decides to give Lauren two weeks off work so she can do a quick-fire wedding.  That’s good (albeit a little strange).  Unfortunately, Lauren’s mother has gone off the grid in Darwin (after walking out on her husband) and the wedding cannot proceed until she’s located.  That’s bad.

The next hour is a muddling conglomeration of comedic scenes.  Lauren borrows her father’s four-wheel drive and together with Ned, they go on a road trip through the Northern Territory in search of her mother.  They run into enough people along the way who can provide clues as to her whereabouts.  As all this goes on, wedding preparations continue back in Darwin.  Lauren’s workaholic, semi-villainous boss is quick to take the organisational lead and dish out responsibilities to friends and family members.

Top End Wedding is a film that struggles to balance the tones between comedy and drama.  One minute, Lauren and Ned are frantically driving across the country and worried about her mother’s wellbeing.  The next minute, they’re going for a romantic “time out” while taking in the sights of Kakadu.  These scenarios feel overly manufactured and scripted.  It’s as if the movie is part story, part tourism advertisement.  The continual “cross backs” to the goofy Darwin wedding preparations add to the film’s awkward flow.

While the opening hour is messy, Top End Wedding delivers in the final act with a heartfelt, emotional finale.  Without giving too much away, it has something to say about the importance of family and our heritage.  There are times when we become so preoccupied in the stresses of day-to-day life that we don’t appreciate the sacrifices made by our parents and grandparents to help get us to this spot.  It’s a worthy message.

Top End Wedding marks the first Australian feature film for director Wayne Blair since The Sapphires, the very successful movie that pulled in more than $14 million at the local box-office and won 11 AACTA Awards.  I don’t believe Top End Wedding will achieve the same level of acclaim but fans of the romantic comedy genre should have plenty of fun.

You can read my interview with director Wayne Blair by clicking here.