Review: All is True 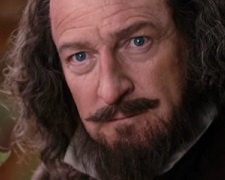 William Shakespeare wrote some brilliant plays (unless you believe the 2011 Roland Emmerich film Anonymous) and whilst his words have stood the test of time, the same can’t be said for details regarding his personal life.  The first known biography of Shakespeare was written in 1709 (almost a century after his death) and it was less of a memoir and more of a critical assessment of his writings.  Further, many details in that biography were subsequently proven to be false.

There’s a sense of irony with the title All is True.  Whilst it’s referring to the original title of Shakespeare’s final play, Henry VIII, those expecting a true-to-life account of the playwright’s later years will be disappointed.  Writer Ben Elton (Blackadder) has crafted a screenplay that pulls from the scant details known about Shakespeare and creates a soapie-style drama where he interacts with an assortment of characters.

If there’s one clear takeaway, it’s that William Shakespeare was a boring, self-absorbed kind of guy.  The fifty-something-year-old version we see in the movie, played by Kenneth Branagh, has retired as a writer.  He laments that he’s spent so much time in his fictional worlds that he’s lost sight of what should be most important – his family.  He’s now spending more time with his wife (Dench) and two daughters, one of whom is unhappily married and the other who is looking to be married.

The problem is that while Shakespeare is physically present, his mind is elsewhere.  It’s a subplot that’s hard to buy into but Shakespeare is only now grieving the death of his son, Hamnet, who passed away two decades ago at the age of 11.  He had always wanted a male heir and he felt that Hamnet could have pursued a similarly prosperous career as a playwright.  Shakespeare is building a backyard garden in his honour and he still carries some of the poems Hamnet wrote just prior to being struck down with the plague.

All is True offers some likeable performances.  Kenneth Branagh, sporting a fake nose and beard, clearly relishes the chance to put his spin on one of history’s greatest writers.  That said, it’s Judi Dench who steals the show with her performance as Shakespeare’s wife, Anne Hathaway.  She’s the more interesting character as we follow the give-and-take dynamic between the pair.  She’s quick to say what’s on her mind… but she also knows not to push things too far given her “place” in a male dominated world.

Becoming bogged down in not-so-interesting diversions (such as Shakespeare’s garden and his obsession to have a male grandchild), All is True is further weakened by unexpected twists about Shakespeare’s son (a feeble attempt to create melodrama) and a rushed, lacklustre finale that takes the many subplots and wraps them up in a manner than feels far too neat.  Some will enjoy this imagining of Shakespeare’s world but I struggled to see the value.