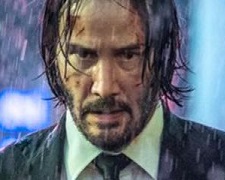 Over the last decade, there have been few franchises to match the fun and creativity of John Wick.  The series began in 2014 with a low-ish budget action movie from unknown stuntman-turned-director Chad Stahelski that grossed a tidy $89m at the worldwide box-office.  With that same film garnering even more fans from its DVD and streaming releases, the 2017 sequel pulled in a more substantial box-office haul of $172 million.  The thumbs were up from both critics and the public.

It’ll help if you’ve seen the earlier movies because John Wick: Chapter 3 – Parabellum begins precisely where the last film ended.  John Wick (Reeves) killed a renowned crime lord but unfortunately, he’d done so on the grounds of The Continental Hotel in New York City.  That’s a clear breach of the rules laid down by The High Table, who govern the work of assassins, and so they’ve declared Wick “ex-communicado” and placed a $14 million bounty on his head.

It seems that every hitman alive then comes after Wick.  He can barely walk down an alleyway without encountering someone who wants to kill him.  The result is an array of great action scenes where they’re attacking each other with guns, fists, knifes, axes, cars and… wait for it… horses.  He doesn’t have much support but there are handful of characters, including those played by Halle Berry, Anjelica Huston and Ian McShane, who reluctantly offer help as settlement for past favours.

There’s a great addition to this instalment – a ruthless, emotionless woman who is simply known as The Adjudicator.  It’s her job to enforce The High Table’s rules and she does so in a by-the-book manner.  There’s no room for negotiation with The Adjudicator.  With an uncanny ability to know everything that’s going on in the world, she’s uses her henchman to dispense quick, brutal punishments for those she has deemed guilty.  Asia Kate Dillon (Orange Is the New Black) is chillingly good in the role.

In keeping with the style of the previous two flicks, director Chad Stahelski makes the film “stand out” with colourful production design and a strong editing.  It’s easy for action directors to fall into the trap of making cuts every half-second to give the impression of chaos (and also masking the stunt doubles).  That’s not the case here.  The same camera stays on the characters for several seconds at a time and it helps audiences appreciate the craft of the fight sequences whilst also understanding what is going on.

There’s a slight staleness to the script.  It’s a cool, intricate world (from the call centre to the use of special coins) but it’s starting to feel more familiar and less creative with each new movie in the franchise.  Still, there’s a lot of enjoyment to take from John Wick as he goes about his business.  I’m not sure of his final body count here but that number would be close to the total number of words he says during the 131 minute running time.