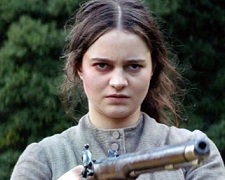 From Cate Blanchett to George Miller to Catherine Martin, Australia has a great reputation for creating talented actors, writers, filmmakers and craftsmen who have made a name of themselves on the world stage.  The next name for you to remember (if you haven’t already) is Brisbane-born writer-director Jennifer Kent.  Her debut feature, The Babadook (2014), developed a cult-like following across the globe and won 3 AACTA Awards including best film.

It’s taken five years for Kent to develop her sophomore effort but the wait has been worth it.  It’s set in 1820s Tasmania and Kent worked with historians, cultural experts and Aboriginal people to depict the era as accurately as possible.  This was a period in history where British convicts and military guards claimed ownership of the island and fought heavily against the Aboriginal resistance.

The central character here is Clare (Franciosi), a 21-year-old Irish convict with a husband and a newborn child.  Clare has served the final part of her sentence at a small military base and while she is entitled to her freedom, she is continually denied by the depraved Lieutenant Hawkins (Claflin) who abuses his power in the most brutal of ways.  The scenes between these two characters are tough to watch and that’s a testament to Kent’s skilful direction (which never becomes gratuitous) and the actors’ fierce performances.

A significant event (which I won’t reveal) sets the stage for the drama which follows.  Lieutenant Hawkins pulls together a small troop of soldiers and heads on a dangerous, week-long trek to the town of Launceston in search of a promotion.  He is pursued by the now vengeful Claire who, guided by a young Aboriginal tracker named Billy (Ganambarr), seeks to kill Hawkins and in doing so, help sooth her tortured soul.

The Nightingale is both an absorbing character study and a gripping history lesson.  Irish-Italian actress Aisling Franciosi (Game of Thrones) is outstanding as the strong-willed Clare.  There are times when you’ll feel sympathetic towards the character but there are other times when you’ll be frustrated by her own lack of understanding and compassion.  The connection between Clare and Billy, which evolves with each passing day, serves as the film’s heart.

Shot largely in the Mount Field National Park north-west of Hobart, Polish-born cinematographer Radek Ladczuk makes the most of the beautiful, yet claustrophobic setting.  Kent also chose to use the narrow 1.37:1 screen ratio (seldom seen these days) to ensure the humans were “front and centre in the frame” and did not become secondary to the Tasmanian landscape.  It’s a good decision.

Filled with exceptional performances, The Nightingale is a confronting, powerful drama that is not easily forgotten.