Review: Ready or Not 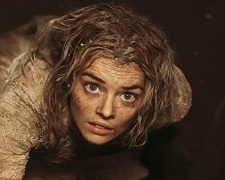 There are many reasons to hate one’s in-laws but Ready or Not is going for something rather extreme.  The film opens with Grace (Weaving) about to marry the man of her dreams.  Alex (O’Brien) is smart, kind and good looking.  It also helps that his family is “richer than God” with the wedding festivities set to take place at their expansive country mansion.

The ceremony goes to plan but a few hours later, Grace finds herself at the centre of an odd tradition.  Every time someone new becomes part of the Le Domas family, they all congregate in a special room at midnight and play a game together.  Grace has the honour of drawing a playing card from an old box and flipping it over, the choice of game is revealed – hide and seek.

How do you make a movie out of such a simple, childish game?  Writers Guy Busick and R. Christopher Murphy have done so by raising the stakes and the consequences.  There’s some weird supernatural stuff going on inside the house (it’s hard to explain) but it boils down to this – Grace has to stay hidden and avoid capture until sunrise.  If she wins, she gets to keep her life.  If she loses, she will be brutally killed.

It’s never easy creating something fresh within the well-worn horror genre but Ready or Not deserves praise for its cool concept.  You’ve got a traumatised young woman being chased by some deranged family members in a giant house that has secret rooms and passageways.  When you throw in ancient weapons, clueless servants and a myriad of security cameras, there are lot of directions in which the story could go.

The execution is a touch clumsy.  The film is at its best when it’s creating tense sequences (such as a scene in a butler’s kitchen) where you’re not sure how the protagonists will extricate themselves.  These moments are a little clichéd but they’ll still have an impact on audiences.  The film is at its weakest when it tries to transition from horror to comedy.  There are a few well-earned laughs but for the most part, the gags feel unnecessary and they detract from the menacing tone.

27-year-old Australian actress Samara Weaving (Picnic at Hanging Rock) will win fans with her emotion-charged performance as Grace.  She’s created an authentic lead character who makes the odd mistake and who reacts/overreacts to situations in a way that we can relate to.  The make-up artists deserve praise for their key part in creating the cuts, bruises and injuries that mount up with each passing hour.

More could have been made of the villainous Le Domas family (the likes of Andie MacDowell are wasted) and the decisions of some characters lack logic but on the whole, Ready or Not offers more pros than cons.