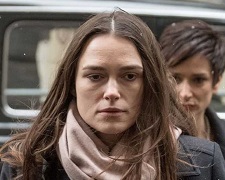 South African director Gavin Hood has ventured out into a range of genres including science fiction (Ender’s Game), action (X-Men Origins: Wolverine) and home-grown dramas (the Oscar winning Tsotsi).  That said, there’s one subject that Hood seems particularly attracted to.  Rendition (2007) recounted the true story of a Lebanese man illegally tortured by the CIA.  Eye in the Sky (2015) was a fictional tale about British military folk using drones to spy on militants in Kenya.

The theme of secret government surveillance is explored once again in Hood’s latest effort, Official Secrets.  It’s based on the real life tale of 28-year-old Katharine Gun (Knightley) who in 2003, was employed as a translator within the Government Communications Headquarters (GCHQ) in South West England.  Her job was to listen on wiretaps involving Chinese subjects, translate into English, and relay sensitive information to her superiors.  In simpler words… she was a back office spy.

It was around this time that the United States was pushing strongly for war with Iraq under the belief they were developing a nuclear weapons program.  The U.S. sought a resolution from the United National Security Council to sanction military action in Iraq but there was uncertainty as to whether enough countries would vote in support (it required an affirmative vote from 9 of the 15 member countries).

To improve their chances, the National Security Agency (NSA) in the United States asked their British counterparts to gather intelligence on Security Council delegates by intercepting their phones and emails.  They would target officials from the likes of Chile, Mexico and Pakistan with the hope of using damaging information to “blackmail” these countries into supporting the Iraq war.  It was dodgy stuff.

Gun never felt comfortable with the request and after much soul-searching, she slipped a copy of the NSA’s memo to a friend who subsequently passed it on to journalists at the Observer newspaper.  The story became front page news on 2 March 2003.  The GCHQ launched an immediate investigation and, worried that someone else might take the blame, Gun confessed to her role as the whistle-blower.  She was charged for leaking sensitive government information under the Official Secrets Act and faced a lengthy jail sentence.

Gavin Hood couldn’t believe that he’d never heard about Katherine Gun’s story when first approached about the movie.  It was “big news of the day” that was quickly forgotten when the war itself began.  Hood flew to London and spent hours with Gun, the journalists and the lawyers to create a realistic, authentic script.  He also refuted the demands of action-loving studio executives who were looking for a script with more carnage and car chases.  The finished product makes for great viewing.

Keira Knightley is outstanding in the lead role as she grapples with the validity of her acts.  There are times when she’s glad she leaked the memo but other times when she regrets her decision (to the point where she’s physically ill as she struggles to deal with the aftermath).  In the same vein as the Academy Award winning Spotlight, we also follow the actions of the journalists as the dig to confirm the memo’s veracity.  Considering the newspaper had made the decision to support the Iraq war (acting as a quasi-PR machine for Prime Minister Tony Blair), there was much angst about the decision to publish.

There’s an unforgettable punchline to this tale which involves Gun, her lawyer (Fiennes), and the Director of Public Prosecutions.  Not easily forgotten, Official Secrets is another reminder about the dangers of unchecked government power.