Review: Portrait of a Lady on Fire 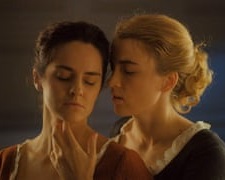 I often lament that film titles are boring and unoriginal when compared to those we see in books, songs and theatrical productions.  That’s not the case here.  Are we talking about a portrait of a lady… on fire?  Or is it a portrait… of a lady on fire?  There’s also room for interpretation when it comes to “portrait” and “fire”.  Is it a reference to something physical or do these words carry a different meaning?

The answer to all of these questions is “yes” which highlights the complex, beautiful nature of this feature film from French director Céline Sciamma (Water Lilies, Girlhood).  Its richness was revealed at the Cannes Film Festival back in May, where it won the award for best screenplay, and it’s now being honoured more widely with critics’ awards and appearances on annual “top 10” lists.

Sciamma takes us back to the 18th century where, in a period of history prior to photography, the only way to capture and preserve one’s image was via the painting of a portrait.  This relevant because Héloïse (Haenel) is a young French woman who, through the intervention of her mother, is engaged to a wealthy suitor she has never met.  He has requested a portrait of his bride-to-be so he can see what she looks like before the big day arrives.

The problem is that Héloïse has no desire to marry and hence, refuses to pose for any painter.  It’s the reason her mother has adopted a sneakier, more cunning approach.  She has employed the services of a young female painter, Marianne (Merlant), but asked this not be revealed.  Marianne’s job is to befriend Héloïse, spend time with her, and use the learnings to secretly paint a portrait without her knowledge.  All of this takes place on a near-deserted island off the western coast of France.

Portrait of a Lady on Fire is one of the year’s best films (and I can confidently say that given it’s being released on Boxing Day).  It’s the kind of movie I like – one that relies on eye movements, facial expressions and gestures as opposed to forced, unnatural dialogue.  Just as Marianne studies her subject matter, so too do we as the audience.  These two characters are continually “sizing each other up” as they seek information whilst also maintaining their guard.  Stars Noémie Merlant and Adèle Haenel are outstanding.

Cinematographer Claire Mathon (Stranger by the Lake) makes use of great camera angles (such as when Marianne sees Héloïse’s face for the first time) and composers Jean-Baptiste de Laubier and Arthur Simonini heighten the mood during key scenes by using a choir-heavy music score.  Some may see it as slow but this is a careful, skilfully assembled drama where it feels every scene and every image has been thought through in immaculate detail.

Portrait of a Lady on Fire earned a Golden Globe nomination for best foreign language film but we won’t be seeing it at the Oscars as each country can only submit one film for consideration.  I’m yet to see France’s official submission, Les Misérables, but if it’s as good as this, I’ll be surprised.