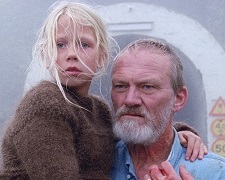 A White, White Day takes place in Iceland but it could arguably be set in any country. It delves into the universal themes of death and grief.  For the first 70 minutes or so, it’s a patient/slow observational drama centred on an elderly man.  When talking to a therapist, he simply describes himself as a “father, grandfather, policeman and widower.”

It’s that later noun which is most key. Ingimundur (Sigurddson) is still coming to grips with the unexpected death of his wife in a car accident.  Taking time off from work, he’s now pouring his energy into home renovations while also spending time with his inquisitive 8-year-old granddaughter and his soccer playing friends.

Just like the lead character, the film seems somewhat directionless during the opening two acts. We’re watching short, fragmented moments in the life of an ordinary guy.  He revisits old home movies.  He moves a small boulder which has fallen on the road.  He reads a scary bedtime story to his grandchild.  You wouldn’t be alone in asking yourself the question - what’s the point and where is this all going?

It’s alluded to during the early stages but the tension finally ratchets up when Ingimundur confronts a younger man who he suspects had an affair with his wife.  His suspicions were aroused when looking through library books and old photos passed on by his wife’s work colleague following her death.  It’s a personality shift that will come as a surprise.  We’ve gotten to know Ingimundur as a quiet, docile man but now he’s consumed by rage and will stop at nothing to get the answers he seeks.

Iceland doesn’t have a huge movie industry but they’ve produced some great stuff in recent years including Rams and Woman at War.  It’s an intriguing country given their isolated location, cold temperatures and small population (just 364,000 people).  The most memorable sequence in the film occurs at the very start.  We’re treated to a lengthy time lapse that highlights the country’s beauty and how it changes depending on the season and the time of the day.  It reaffirmed my desire to visit one day.

Unfortunately, the film’s meandering nature struggled to hold my early interest.  We’ve seen so many films around the world that deal with grief and there’s nothing here that offers a fresh, different perspective.  It’s only scratching the surface when it comes to character development and I wasn’t won over by the finale’s sudden change of pace and its big revelations.

Selected as part of the International Critics’ Week section of the 2019 Cannes Film Festival, A White, White Day struggles to make an impression.