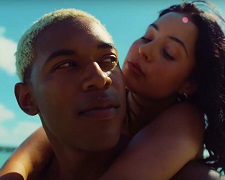 Love has the power to divide us and yet, love also has the power to unite us.  It’s not a new message but it’s one that’s easy to forget.  Thankfully, we have gifted filmmakers in the world like Trey Edward Shults (It Comes at Night) who can put this lesson at the forefront of our minds by creating multifaceted characters and putting them in troublesome situations.

Waves begins by focusing on an African American teenager named Tyler (Harrison Jr) who is completing his final year of school.  Like so many at that age, he’s a complex kid trying to find his place in the world.  This is illustrated in an early sequence where Tyler is taking shirtless selfies in front of his bedroom mirror and posting them to Instagram in search of likes and comments.  He’s a popular, good looking guy with athletic prowess but this scene alludes to a level of anxiety and insecurity that he keeps hidden from others (including his family).

In the weeks that follow, Tyler’s life quickly slips off the rails.  He breaks up with his girlfriend (Demie) after a weighty disagreement.  Dreams of landing a college scholarship dissipate when a serious shoulder injury ends his wrestling career.  The burden of living up to his father’s (Brown) increasingly lofty ambitions becomes too heavy to carry.  Tyler turns to alcohol and prescription medication as his “way out” but it only adds to his woes.

Waves is a tense, unrelenting film.  There’s not a lot of reprieve for audiences.  It’s like watching someone self-destruct in slow motion and yet be powerless to stop them.  It’s a narrative that can also be looked at through multiple lenses.  Did his father push too hard?  Should his mother have noticed the warning signs?  Should his sister have intervened?  It reiterates that the actions of one have ramifications for many.

Shults infuses the film with his own distinctive style.  From the circular, fast moving camera work of cinematographer Drew Daniels (Skin) to the nightclub-like score from Oscar winners Trent Reznor and Atticus Ross (The Social Network), Waves grabs your attention early and holds it throughout out.  You become invested in the characters and care about their fate.  All the performances are strong but it’s hard to go past Kelvin Harrison Jr (It Comes at Night) in the intense lead role.

Without giving too much away, Shults makes the gutsy decision to change tack at the halfway mark and it gives him the freedom to develop the film’s themes more fully.  It’s been a long wait for Waves to make it to Australian cinemas (the world premiere was almost a year ago) but those that seek it out will be rewarded.