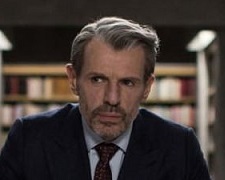 The Translators is brought to us by French director Régis Roinsard.  There are many characters but it’s centred on the world of publisher Éric Angstrom (Wilson) who is about to release the final instalment in a best-selling trilogy.  Given the enormous hype (think Harry Potter level of excitement), it’s a book that will make Wilson and his company a VERY large sum of money.

The plan is to release the book simultaneously across the globe in a variety of languages but to do so will require significant work.  Angstrom has assembled a team of nine translators who will take the manuscript and perform the necessary translations over a period of several weeks.  They’re an eclectic group who include young, old, male, female, French and international.

Given the secrecy which surrounds the book, Angstrom has gone to extraordinary lengths to avoid leaks.  All of the translators are required to perform their work in an underground bunker where they have no access to phones, the internet or the outside world.  The working conditions sound horrible but they are provided ample living quarters (including a gym and swimming pool) and decent food.  The money isn’t too bad either.

As we learn from the opening scene, Angstrom’s controls have not been effective.  He receives anonymous threats via email that demand a huge ransom or else the book will be released online.  Given that only he and the author have been in possession of the original manuscript, Angstrom is pointing the finger at the nine translators and trying to establish who is responsible and how they did it.

Borrowing from the formulas made famous by Agatha Christie, The Translators is designed as a classic “whodunit”.  Roinsard teases the audience by essentially giving everyone a motive and then it falls upon the audience to pick the mystery before all is revealed.  Unfortunately, despite the early intrigue, I wasn’t convinced by the film’s second half when the curtain is pulled back.  The screenplay is a little too tricky for its own good and hence, it loses credibility.

There’s still fun to be had from watching this.  I liked the setting (much of it taking place in the underground bunker) and the broad cast that includes Italy’s Riccardo Scamarcio (John Wick: Chapter 2), France’s Olga Kurylenko (Quantum of Solace), and England’s Alex Lawther (The Imitation Game).  They’re a great group who work well alongside one another.

Every few weeks, we have a film that sounds great on paper but can’t quite deliver on its lofty ambitions.  The Translators is the latest example – a watchable movie that comes with a few flaws.