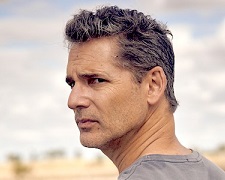 I can still remember attending the Brisbane International Film Festival with a group of friends in July 2000 and seeing Eric Bana’s incredible performance as notorious criminal Mark Read in Andrew Dominik’s Chopper.  It was if his career had changed in a heartbeat.  Prior to that, everyone knew him as a goofy comedian from the popular sketch comedy series Full Frontal.  Post Chopper, he was landing roles in major Hollywood projects including Black Hawk Down, Hulk, Troy, Munich, Star Trek and Hanna.

Curiously, Bana has appeared in just one locally made film over the past two decades – Romulus, My Father which won the Australian Film Industry Award for best picture back in 2007.  I’m not sure what kept him away for so long but, after a lengthy absence, he’s teamed up with acclaimed writer-director Robert Connolly (who he first met making Romulus, My Father) in making The Dry.  It’s adapted from Jane Harper’s award winning book first published in 2016.

Pulling off a good whodunit can be a difficult exercise.  You don’t want to make the conclusion too predictable but at the same time, you need something that makes sense and fits with what’s been revealed in the lead up.  Connolly finds the perfect middle ground.  He uses distinctive actors and simple, ordinary conversations to flesh out the many characters during the opening act (each has a motive) and this provides a sturdy platform from which to reveal their secrets in the later stages.

As an added bonus, there are two mysteries to solve.  Aaron Falk (Bana) is a celebrated Australian Federal Police officer who has returned to Kiewarra, the small, drought-stricken country town where he grew up.  It’s the first time he’s visited in roughly 20 years and the circumstances are not pleasant.  He originally came for a funeral but he’s now found himself providing off-the-record assistance to the local police officer (O’Donnell) as they investigate a murder-suicide perpetrated by a close childhood friend.

Aaron isn’t welcomed with open arms and that’s because he, as a teenager, was suspected as being involved with the death of a female classmate who drowned in the town’s river.  No one was ever charged but questions remain unanswered and the trauma still lingers.  This subplot is told by way of effective, quick-fire flashbacks with younger actors stepping into the shoes of their current day counterparts.

Connolly deserves praise for skilfully weaving the subplots together but Eric Bana warrants just as much attention for his leading performance.  It’s hard to imagine someone more different from “Chopper” Read.  He portrays Aaron as a placid, softly spoken man who avoids confrontation.  There are scenes where other characters try to pick a fight (such as a moment on the hotel stairs) but Aaron knows the best means of defusing a tense situation is to keep his mouth shut.

Loaded with a glut of memorable supporting performances – everyone from Eddie Baroo as the hotel bartender to Miranda Tapsell as the local officer’s shrewd wife – The Dry is a wonderful addition to the canon of Australian cinema.