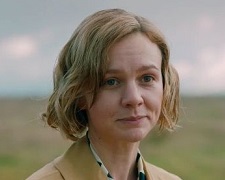 If you visit room 41 at London’s British Museum, you’ll find an array of precious artifacts from an Anglo-Saxon kingdom of the early 7th century.  Their discovery in 1939, labelled as one of the great archaeological finds of all time, is the subject of The Dig.  Australian director Simon Stone (The Daughter) and English screenwriter Moira Buffini (Jane Eyre, Viceroy’s House) have drawn from the John Preston’s 2007 novel – a work described as part historical, part fictional.

A two-hour movie about an archaeological dig may not sound like riveting cinema but those involved have done a wonderful job in making this tale both interesting and genuine.  A significant chunk of the credit belongs to Carey Mulligan (An Education) and Ralph Fiennes (The English Patient) who bring the two leading characters to life through their moving, subtle performances.

Mulligan plays Edith Pretty, a wealthy widower who lives with her young son on an expansive estate in Suffolk, England.  She’s always been curious about a series of man-made mounds on the southern part of the property and so, after years of procrastination, she’s hired the services of an amateur archaeologist to learn if anything of value lies beneath.  His name is Basil Brown (Fiennes) and he’s a married, subdued, not-so-wealthy man who has taken the job as much for the money (he’s handsomely paid) as for the experience.

I’m not sure we have a word for it in the English language but what develops between the two is more than a friendship but less than love.  They increasingly rely upon each other for advice and support but, knowing that Basil is happily married with a kind-hearted wife, they never “cross the line” into anything sexual.  When the dig bears fruit, they become a formidable pair as they push back against many advice-givers and decide what to do with their discovery.  The imminent threat of war (World War II was about to kick off) adds a layer of complexity.

This film is strongest when Mulligan and Fiennes share the screen and conversely, it’s weaker when devoting time to other characters involved with the excavation.  The most obvious is a love triangle between other archaeologists that feels like it’s only been included to satisfy romantics.  It’s cliched, poorly fleshed out and adds little to the broader story.

Helping bring to light a remarkable piece of British history that few will be familiar with, The Dig tells a damn good tale.