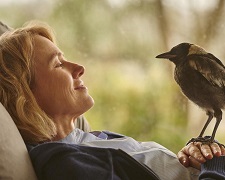 Given it’s a rite of passage to be swooped by an attacking magpie here in Australia, the idea of a family adopting one as a playful, loveable pet sounds a little far-fetched.  Thankfully, any believability issues are dispensed by the fact Penguin Bloom is based on a true story.  Some will have read the popular 2016 biography, authored by Bradley Trevor Greive, while others might remember a feature story on 60 Minutes from 2018.  The level of public interest in this tale clearly contributed to the film rights been snapped up so quickly after the book’s original release.

We’ve seen live action movies involving stunts animals (everything from dogs and cats to bears and horses) but director Glendyn Ivin was sceptical about how to do the same with one of Australia’s most famous wild birds.  It wasn’t until he reached out to a “bird whisperer” from Queensland that he realised a magpie could be trained to do the movements and tricks we see on screen.  It reduced the need for costly digital effects and, despite a few bird scenes feeling cobbled together from inconsistent shots, it gives the film a sense of credibility.

In terms of narrative, there are two prominent stories being told.  The first is the aforementioned light, feathery yarn where the oldest son, Noah (Murray-Johnston), finds the abandoned magpie on the beach, takes it back home, and nurtures it with the help of other family members.  Yes, it makes annoying noises and yes, it poops everywhere but they turn out to be minor quibbles given the positive way it brings the household together (particularly the impressionable kids).

The second story is heavier, deeper.  Noah’s mother, Sam (Watts), was recently paralysed from the waist down after falling 6 metres off a balcony while on a Thai holiday.  Everyone wants to help, particularly her mother (Weaver) and husband (Lincoln), but Sam is stuck is a pit of self-loathing and continually pushes people away.  The memories of her prior life, where she was a well-liked nurse and an active surfer, further contribute to her negativity as she mopes in bed.

It’s not hard to predict how things will unfold and when it comes to analogies, the writers are laying it on thick.  There’s even a sequence where Sam points out that Penguin has wings but can’t fly and that she has legs but can’t walk – part of the reason the two forge a bond.  Noah also offers up some profound narration which feels over-written given his young age.

Whilst character development is lacking in places (particularly the husband the two youngest kids), Penguin Bloom delivers as an inspiring, feel-good tale about overcoming adversity, and as another opportunity to appreciate the talent of New Zealand actress Rachel House.  Her arrival midway through the film, as a kayaking instructor trying to build Sam’s confidence, gives the film a huge boost.  House received the New Zealand Order of Merit (in 2017) but she deserves a damehood from the Queen given her ability to improve any movie she appears in.

Shot in the actual home where the real Bloom family live (they moved out for a few months to allow the shoot to occur), Penguin Bloom will win most people over.